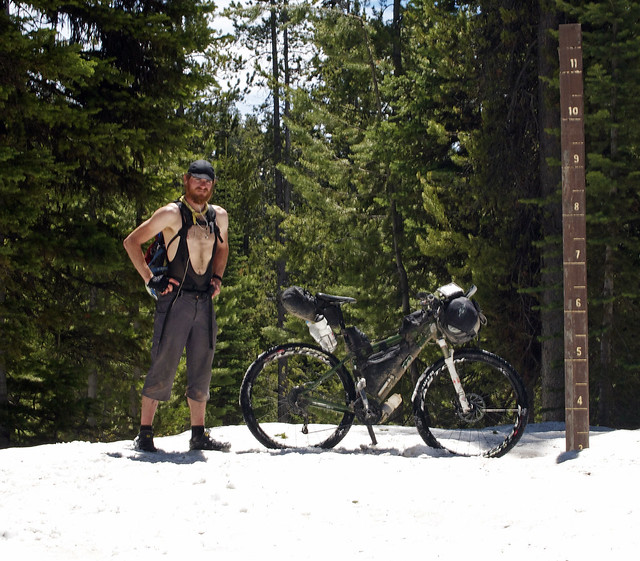 June 22nd, 2011, between Yellowstone and Grand Teton National Park on the Ashton-Flagg Ranch Road with a considerable amount of snowpack still lingering.

At around 9:00pm last night, I was rolling through downtown, when a drunk dude threw something at me.

I’m not into this.

I quickly locked my brakes and came to a screeching halt, to have a word with this man. And of course, I stopped, right where a patch of dirty slush-snow was hiding and promptly lost control and tumbled. Now humiliated, I get back up and just ask the dude, to just please not throw anything at me. And repeat that a couple of times. They didn’t really understand what the big deal was – it was a small bunch of roses. They turned the corner and laughed and laughed.

Without much ado, I rode to the end of the block, turned right three times and met up with the same group of dudes, got the one’s attention and quickly flung the U-lock that’s always in my back ass pocket, right at the kid’s face, yelling, “JUSTICE!”, while pedaling quickly away, his mouth now a sea of blood and broken bits of teeth and gum.

In my mind. In the real world, I turned and kept going on my way, embarrassed at myself and enraged at stupid drunk dudes. I had a few miles to go until my destination, where I cooled off. It’s somewhat humorous to think this was all because of throwing flowers at a stranger, but I’ve got enough things to worry about, riding downtown on a Saturday night, where drunk people aren’t just walking down the sidewalk, but are also sharing the road with me. Messing with my focus can still be dangerous and I’m not the most well-put together person and I have a temper that I attend to – that needs to be attended to. I’m probably modest to a fault, as long as you show respect back. I guess.

A stranger revelation soon entered my head though. As someone that devotes a good chunk of time to being, dare I say, “athletically active”, I’m a pretty tiny guy – my body doesn’t get bigger and more developed from the workload, it simply becomes much more conditioned. I really work primarily on conditioning myself to go farther and perhaps a little faster, which places you a little on the light side of the scale. I like climbing mountains and that calls for a fairly wiry body. After 7 hours riding, then a shower and then some food stuffed in me, a ride through the city can be tiring and I don’t really give the illusion of someone you shouldn’t mess with. And maybe because of this, I am.

Or maybe the guy and his gaggle of dudes were admirers of cycling and this svelte guy and that’s why the roses were thrown. If so, I’m touched, but there’s better way to show a man’s attraction, sexual or not to another man. Regardless!

No hiking/running this past week – weather, except for Monday (if I remember) was fairly exceptional. “Errands” sure do add up. I don’t own a car, so every day that’s a rest day is what you may term a “recovery ride” and it’s easy to chalk up 10 miles to and from downtown from where I currently live, every day. I try to imagine the relationship with real, actual athletes and their cycling and how it’s almost this separate thing they may do, after getting home from work or driving to a trailhead or something. It’s really a different thing, I guess.

All my rides for a few months have just been on a Surly Crosscheck, outfitted with some riser bars and cross or “aggressive” touring tires, as well as lights and fenders and lately, a nice cush seat and a speedo. It would make Kent Peterson proud at its mutt-ness and makes the cool kids cringe when I roll up. I’m waiting for one to challenge me to a sprint or something and explain to them that a sprint, to me, is to the state line. I mean, they’ll look at me funny, but I’m used to funny looks.

Riding a 2:1 gear ratio up the relatively mild 5% grades you find on front range roads seems doable in my current conditioning. I somewhat feel a bit of worry about my knees, but they currently haven’t been giving me any painful protests. I find though, that my pedaling style is heavy on the pull-back, where my hamstrings take on a good portion of the workload and instead of pounding and grinding up the mountain, I still try to focus on spinning the cranks, my calfs and hamstrings very noticeably doing some work. If I wasn’t so lazy, I’d probably make a half-decent runner.

And some pull ups.

Gym work has been partly in attempt to work on my injured shoulder. 135lbs is 2, 45lb plates and the bar, which is what I’m actually accustomed to warming up on, but it’s rather now about as much as my shoulder can take before the weird twinge gets to be a little too temperamental. Still, it’s 10lb improvement from the last time I tried a bench press, which has been the prevailing positive arch in this storyline, so I’m happy. Also threw in dips, which has always been a much more stronger “lift” for me and has seemed to be much less aggravating to my shoulder, to my surprise. Still assisted with a little counter weight, but felt good to do something else for a change.

Happy with the mileage, much more than last week, albeit the weather was better and there wasn’t an 8 hour hike in the middle of it, during a snow storm. Next week? Keep the mileage hovering where it is, maybe more “Active” days, if at the cost of longer rides, as everything is now pretty much snow/ice free in the lowlands and the mountains are getting dumped on and the avy-danger is somewhat dubious.

Maybe a few “hill” repeats up Lookout Mt. Rd – ~6,000 feet of elevation gain can be had in a day’s ride. Which is rad. I may try another run, or even get me some new runnin’ shoes, as the shoes I currently have are running out of time they’re worth having. Think I bought this current pair almost 8 years ago? Goes to show, I don’t much run that much. But, I’d like to treat my feet/knees/everything right, so maybe pick something new, out.