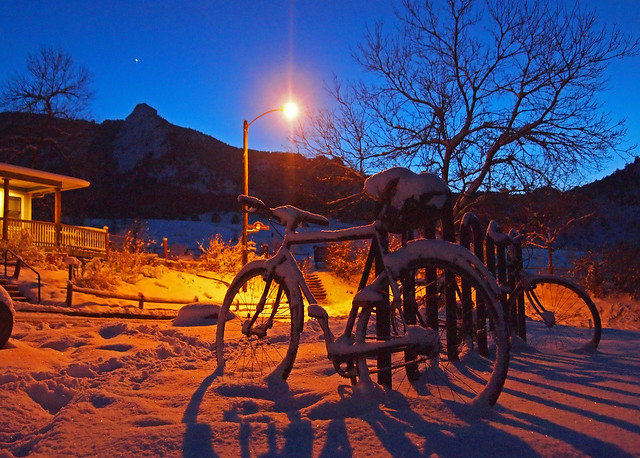 Forecast was for snow on Wednesday and as much as I wanted to have a bike-heavy week, it wasn’t going to happen with a snowstorm in the middle. I’m not even close to the point of riding a trainer inside at the moment, as I have nowhere to put something like that and well, no trainer  and buying a snow-specific bike seems silly when it’s much funner to spend much less and get a descent pair of warm boots and huck it.

I rode the bus to Boulder after a fun time navigating my bike to the station in the snow. My thoughts were to do South Boulder Peak, as my last effort was sidelined to try Bear Peak with new found ally. But, the bus ride was slow from the inevitable traffic from the snow slowing everyone down, which gets  a mind to-a-wandering. I thought rather, let’s do instead South Boulder AND Bear AND Green Mountain?

I’ve done this only once before, in late winter, almost spring conditions. Today though it was only a few dozen meters of visibility and I wasn’t really expecting many people to be on the Peaks. I wasn’t too let down:

South Boulder Peak looked positively other-worldly, as if within a cloud, with lofty builds of snow not yet trodden down or blown away.

Going up Shadow Canyon, I met one trail runner who had broken the trail for me to the Bear Peak/South Boulder saddle, but wasn’t sure if he summitted Bear Peak, or not. He mentioned a lot of scrambling, so I thought I’d investigate. The trail on the map looks fairly straightforward going, well, straight until the Peak. Following his trail, I found it made a 90 degree right and then up a rocky path to a small chute and then to the top of what appeared to be, in the low visibility, a summit. So I followed suite.

It was a captivating place to check out, basically right on the top of one of the flatirons of Bear Peak and what turns into a summit ridge, coming from the South. I couldn’t find a easy way to access the Peak proper in these snow conditions and bad visibility and no partner to abate my lack of gung-ho, so I turned back and tromped on the trail for about 50 yards, until I was just below the summit proper, and scrambled up.

Found snow covering the summit there too, so I counted two first summits for the day. Rounded down Bear Peak and found someone did go all the way to the start of the scrambling section, without summitting, which was curious, but found that they also broke trail through Bear Peak West Ridge, so I was able to complete my hike to Green Mountain, without getting too lost.

The sky started to open up a little bit, as I summitted Green Mountain, but sunlight was also fading, so I high-tailed it back to Chautauqua, to join my ever-patient bicycle,