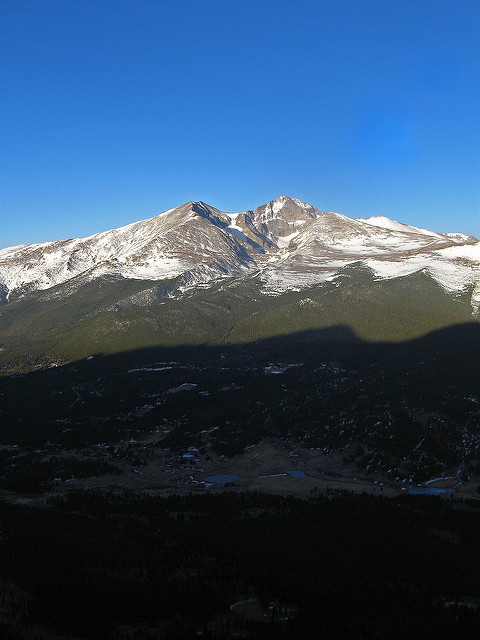 Completed my first overnighter of the season! Haven’t camped out since November, where I road from Denver to the trailhead of Pikes Peak (~100 miles), hiked the Class 1 trail (~26 miles) and rode back the same way as I went, all in three days.

The plan for these two days was to ride to Rocky Mountain National Park, camp out overnight and then the next morning, hike up Twin Sisters and ride out the same day.

Challenge #1: The Ride To

The first challenge of the trip was to ride to Rocky Mountain National Park. From Denver,  my odometer tracks it as only really 78 miles away, but has around 5,000 feet of elevation gain, if you go via Nederland. Riding that distance is something I can do without thinking these days, but this would be the first time I’d be under load and much more load than Tour Divide weight: I would be using The Boat Anchor, aka the B.O.B. Trailer.

Even packing, “minimally”, the trailer system weighs in well over 50 lbs, the only extras I included on this trip were a pair of hiking shoes for the peak bagging, a few warmer clothes than I will be taking for the Tour Divide, a day hike pack and a mini U lock. This is of course much lighter than loads I’ve done before, including trips to this same spot. I’ve attempted (and failed) to climb Longs Peak while it’s been rated, “Technical” last Fall and that took quite a bit more gear (a tent, crampons, stove, food for 2+ days, etc). Trailer systems seem like such a great idea over panniers, until you factor in the weight of the trailer itself and the friction caused by the extra wheel(s). Still, it’s the easiest way to get something shaped like a hiking pack to and from, uh, places. Like, my house to the trailhead (and back).

Once making the destination, the second challenge was to test out the current sleep system. I don’t plan on purchasing more gear than I need, so any gear I already have, that still works is going to be used. One of the sore spots in my sleeping system is my bag. It’s been in services for a few years, now and has seen multiple tours. It’s quite beaten up and sadly, doesn’t really have much, “loft” anymore, despite my best efforts in properly cleaning it. The bag itself is currently being used daily, as it’s what I sleep in.

I have a deep fondness for this bag, as it’s one of the few things that kept me alive while stuck in the middle of a river, on a small and quickly shrinking sandbar during a flash flood in New Zealand. Able to survive below freezing temperatures, near constant rain and the season’s first snow, without drowning or going into severe hypothermia, with only this sleeping bag, waterproof coat and jacket, a wool hat and a small stove to heat water with.

Rocky Mountain National Park would be another challenge, albeit a little safer. I planned to see how well the sleeping bag fared, when being used with a very minimal bivvy, a sleeping bag liner and a self-inflating sleeping bag. I planned to only wear long underwear and a wool hat.

The forecast gave a low of 18 degrees Fahrenheit, much lower than I expect to find on the tour, but if I was, ahem, “comfortable” sleeping at those conditions, I’ll be an ace at much warmer, summer conditions. As a backup, I brought a cold weather jacket and snow pants, which I could quickly put on and jump back into the sleeping system.

Challenge #3: A Little Walk in the Woods

The third challenge, if I survived the night was to get up at 4:30 am, pack up as quickly as possible, and start a hike in the dark up Twin Sisters, which tops out at around 11,400 feet; ~7 miles of hiking all told, and ~2400 feet of elevation gain. I picked this peak because it, ahem, had a, “large probability of success”, aka: it’s a nice easy hike, sandwiched between a longish ride and another longish ride.

With a long ride, a very early wake up call and a tidy hike, the last challenge was to make it home, by bike. Bailout points included Estes Park, just a few miles from the trailhead and Boulder, which has the convenient, “B” bus, right to Denver.

As I hope you would have guessed, I was able to succeed in everything I sought out to do. The ride to RMNP was doable, albeit slow, the sleep system worked, although the sleeping bag felt a little, “dead”.  I took things off, instead of needed put more things on and I figured out the best way to breath in the bivvy without feeling claustrophobic, but still keep the sleeping warm and without condensation. The pillow situation needs some work. The pad I currently have is very large and I could do with a much smaller one – I bought the large one specifically to maximize comfort. For the Tour, I want to specifically minimize weight.

The hike up Twin Sisters happened after the 4:30 am wake up call as planned and I was able to totally break down camp, stash the bike and begin the climb at 5:15 am. Did a mini grand slam on the mountain, trying to summit every sub peak I could find, scrambling a little bit, here and there. Avoided slipping on the ice, didn’t avoid every chance possible to glissade down.

After a lunch of a giant pancake, 3 egg frittata, potatoes, side of bacon, english muffin and vasts amount of coffee, I left Estes Park and took it leisurely the, “easy” way back to Denver (via HW 36), fairly sore, but oddly less sore than I was feeling at the end of day #1. As I’ve experienced before, I get a major second wind late in the afternoon and my pedaling technique drastically changes, as my hamstrings and calves (and probably my ass) takes up the load from my completely blown up quads. I’m probably a runner at heart.

Sadly, the one thing I forgot to do was change out my camera’s batteries, so I was only able to get a shot of Longs/Meeker, before it failed to capture anything else. You can see Twin Sisters Peak in the shadow, right below the Longs Peak Massive as the little bump in the shadow: