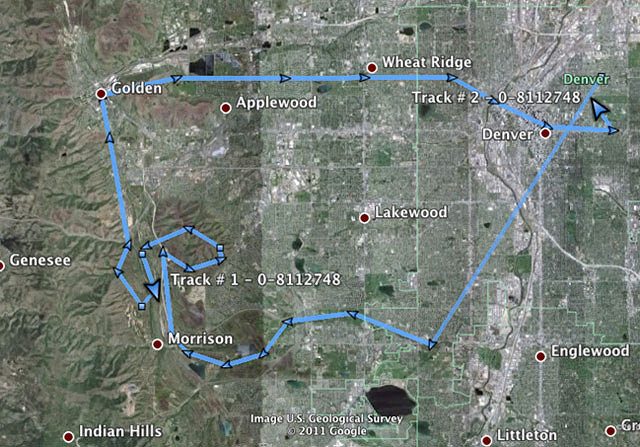 I recently grabbed a SPOT II GPS messenger to play around and get familiar with, before the big Grand Départ. Here’s a tracking of my ride on Thursday: 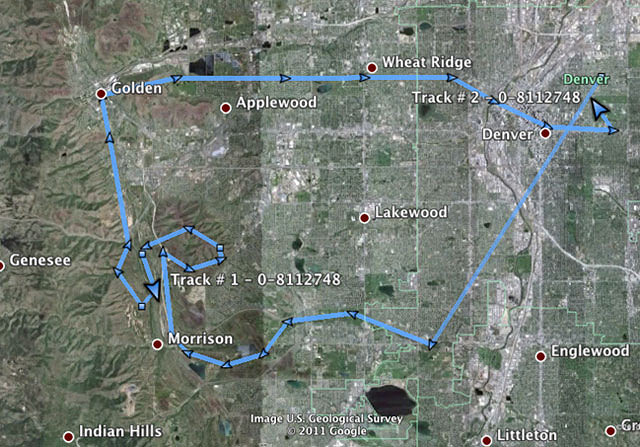 You can kind of tell that I left from my doorstep, went through downtown, took the Platte River bike path to Bear Creek Lake, fumbled around some trails there, out into Morrison and North to a trail head on Green Mountain, did a lap around and then across onto the Dakota Hogback via the Zorro trail and ending by going North through Matthew Winters, into Golden and finally, back home. Kind of.

On one hand, the SPOT II is an incredibly amazing device. The thing is smaller than some cellphones I’ve owned, it runs on three AAA’s and seems almost indestructible. On other hand, little forays like this just don’t have the resolution to map really well. On tracker mode, it’ll send my position every 10 minutes. Even on a 6 1/2 hour ride, that’s only 36-ish points. In > 50 miles. This type of revolution will work fine with 2700 miles of riding, but little casual things, not so much.

The other downside of this gizmo is the price – bought at REI, it costs $50 more than the MSRP would have you believe on SPOT’s own website – $150! Once you have the device, you then need to subscribe to the tracking
service – another almost $150. Per year. Not cheap. Not cheap at all.

The, “BONUS! Adventure Kit!” is fairly lukewarm, it’s just a bunch of crap, wasting space, material,  packaging and my time to go through it all. I wish they’d just keep it simple. Seems to be a empty allure for a casual person to get stoked about getting all this extra stuff.

Packaging like this adds up:  think about how the current packaging takes the space that four spot units with slimmed down packaging could potentially take. Then think it takes currently four times as much space and energy to ship these little gizmos around from wherever they’re manufactured to where they’re distributed. This company has clearly not read Yvon Chouinard’s book, Let My People Go Surfing. I give props to companies that at least try out ethical choices to things as seemingly benign as the packaging.

The Adventure Kit includes a lame keychain flashlight, a whistle, an orange… I’m assuming emergency flag with some advice printed on it and a case for the device itself that has a belt holster attachment thing, which puts the device at the wrong angle to the sky. The idea of having the ten essentials in your kit is a very, very good one and I guess the crap that SPOT includes helps one to build a personal kit out, but I question someone going out on a trip without first having a good 10 essentials kit and then getting something like a SPOT tracker. I’m worried that something like this tracker could give someone with little wilderness experience a false sense of security – even day hikes can turn ugly. If a device like this goes south after one becomes lost, I hope it does its job. I can’t believe something as useful as a compass was omitted. Or a thermometer. Or the whistle/compass/thermometer-type thing I just so happen to have in my pack, as the backup to my actual whistle, compass and thermometer.

But, being a person with considerable talent in getting into pretty tight situations, I look forward to having the SPOT II with me and hopefully never having to hit the, “EMERGENCY” button. Although marketed as a emergency beacon, it won’t work in many different types of situations, as it’s all satellite based – any situation where you don’t have a clear line of sight with the sky: buried in an avalanche, under a dense forest canopy – I don’t really know if it’ll work primo on a really cloudy day. We’ll see.

The ability to send, “OK” messages or even, “Friendly, non-emergency assistance” is a nice touch and could help out with getting a pickup from a trail head after a multi-day excursion, especially since cellphone coverage stinks in the mountains of Colorado, outside of any town. The ability to email people with the OK message is also cute. The personal control panel on the SPOT website for all this is lacking a little bit of polish to be honest. Things are just a little too complicated to figure out,  the personal URL’s are unfriendly looking and long and even in my 6 hours tryout, I got an error message on my laptop at home, telling me the servers were too busy to update the map.

For some dirt bag who’s subsisting on oatmeal, rice and beans and peanut butter and jelly sandwiches – supplemented with burritos, I wouldn’t really recommend spending the money on the SPOT II, unless you have a really good reason – like, you know – Time Trialing a 2700 mile+ backwoods course that follows closely the Great Divide. If you need a beacon, get an actual one, after knowing the type of dangers you’re facing with the terrain that actually requires one.

I’m still interested in seeing what I can do with it, as a tool and perhaps my initial total bumming out over the price, the unneeded crap that comes with it, the obtuse packaging, etc, etc, etc will be slightly smoothed out in the long run. It could potentially same my admittedly accident-prone self.