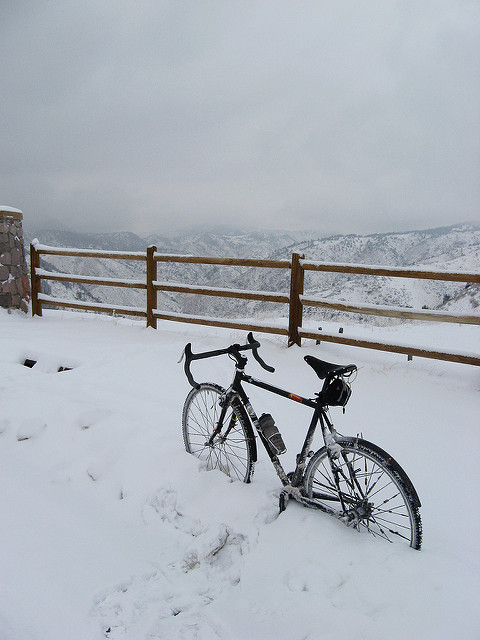 Weather seemed a little iffy on Tuesday, so I decided to keep the ride local. I had a idea for the weekend on what/where to ride and it was going to be a whopper ride in the mountains. I didn’t want to cover any of the tarmac I’d be doing on that ride, so I thought I’d just spin around in circles a little bit, up and down a little local aberration on the topo map called Lookout Mountain.

Lookout Mountain is probably the most accessible cycling route to take that has some descent climbing (you can view the route, here). The road is quiet enough and interesting enough to have fun on. Sometimes you’ll see some downhill skateboarders streak down or para gliders floating around.

Fun even in the snow! When no one in their right mind would want to first ride to Golden from Denver, or do the climb, proper. Except for I guess, you know, me. Some archive photos from 2007 of doing this climb fixed: 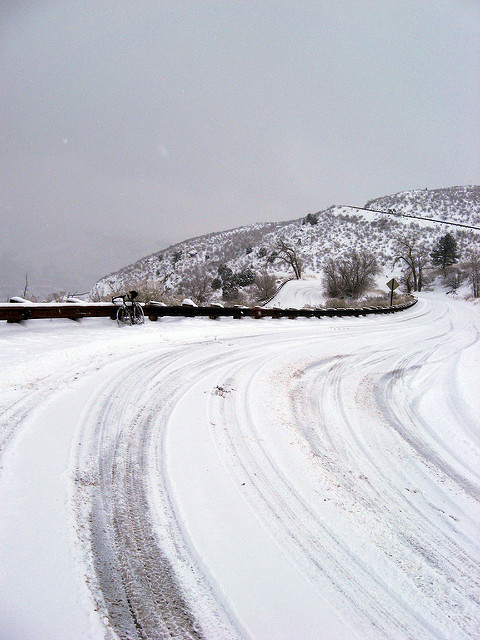 I can’t remember what my record is for using the route as a, uh, “hill repeat”-type of, “training” route. Maybe 4 times? I usually go up the 19th street side and down the HW 40 side and then turnaround where HW-40 reaches I-70 again at the, “bottom” and go up the other side. It cuts a good few miles from a proper loop. This day, I thought I’d just keep going in circles and do it 5 – NO, 6 times, cause that sounded like a neat number.

Left around 8:00am I think. Felt like all hell. Stomach felt bad. Head felt bad. Questioned my sanity to try this, while feeling this way. Had some gastrointestinal events that I will spare you the details, but figured it all out in the Starbucks bathroom (very clean!) in downtown Golden. Bananas are a 1.00 there, if you were wondering. 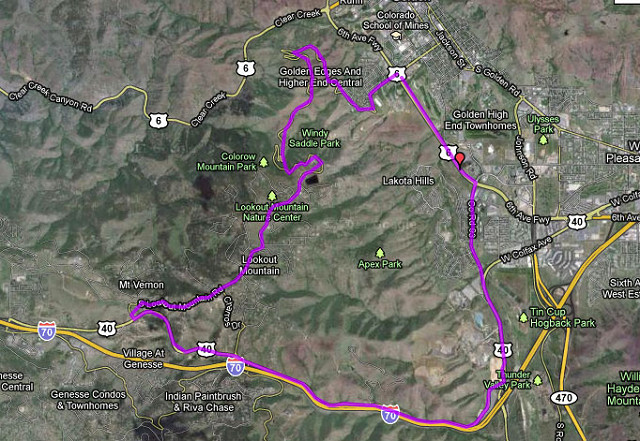 Laps 1-4 were no real big deal.  I didn’t keep track of my time up and down – I’m not organized enough, but lap 1 was a good clip and laps 2-4 were just OK. Lap 5 started to get a little hurting and lap 6 I did with much pain and a little reserve, as I still needed to ride home. The ride home was fast enough for me. The girl working at the burrito joint downtown gave me a break on  my burrito, as she likes to do and that makes the world go ’round as far as I’m concerned.

The day totaled to 136 miles, almost 100 of those either climbing or descending. That pretty much took everything out of me. Dinner consisted of a frozen veggie pizza and an entire apple pie. Still incredibly calorie deficient. Passed out on the couch watching the 1974 documentary about the Giro d’Italia.

Got up today and made the best damn four egg veggie and cheese omelet with four slices of jammed up whole wheat toast and tons of ketchup and hot sauce. And coffee – my God – Pablo’s does it right. Just good, simple food. One of the miracles of doing this type of training is that sometimes basic nourishment in your body feels good beyond what good could be. Sleeping isn’t just sleeping – it’s visiting a separate world. Eating isn’t just eating. Only a few things can compare. Getting released from the city jail. Eating (again) and sleeping (again) after something as similar as a multi-day hike.

Today, I added up the amount of mileage I have done for the month and that total to around 1275 miles – which means I’ve met my personal goal of 1200 miles in the Month of March YEAH! If you’ve found my entries here interesting, please consider donating – I currently am very much behind in funds to do this race. No kidding.

Tuesday also totaled almost 20,000 feet of climbing. I don’t know how that could be and I don’t believe it myself, but there you go. Just like the Little Engine That Could.