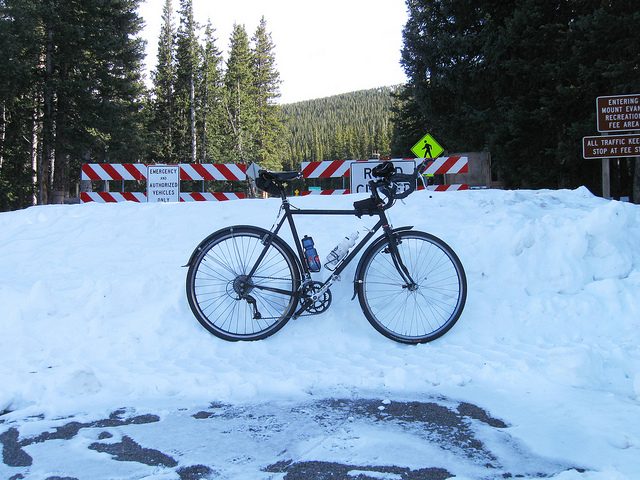 Sunday’s ride started at 5:50 in the morning, the goal being to get up – and over Squaw Pass, a gamble to do in winter, as it peaks at over 11,000 feet.Then, down into Colorado Springs and take the bicycle route that follows I-70, using frontage roads, old HW-40 and the Scott Lancaster bike path.

Getting to HW 103, where Squaw Pass is located was to be done in a very round about way. The mountains, obviously are West of Denver, I started my trek going South East on the Cherry Creek Bike Path, the West on the E-470 trail, until getting up into Deer Creek Canyon and taking a little road called, “High Grade” (so aptly named), before descending slightly into the town of Evergreen, and ascending again onto the turnoff for HW 103. A map may help, we’re going clockwise:

And an insane elevation profile:

Why one would travel so far East to eventually back track West is as ridiculous as a Zen Koan and to start such a hard ride up a pass by first tackling High Grade Road is sheer lunacy, but the goal is to be prepared for a cross country race and I’m quite serious about getting in good enough shape to at least – at the very least, survive.

Squaw Pass proved to be passable, albeit very windy, very cold and somewhat lonely. Few sports of minimal snow, but mostly clear as it is in summertime. Kept myself entertained with silly self-portraits, 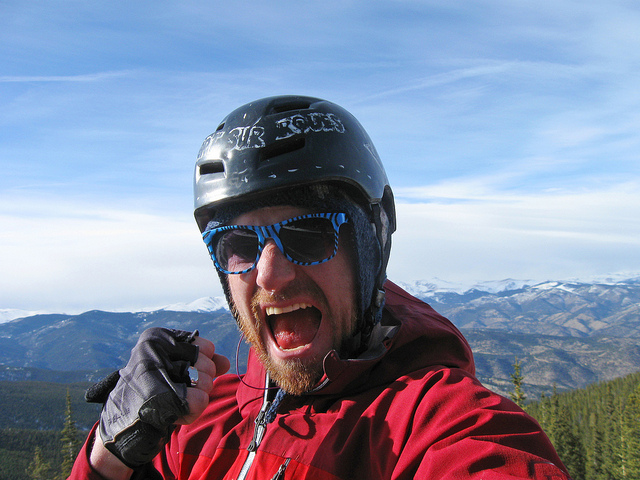 Getting down from the col itself proved to be a little trying. Even though I was wearing three sets of gloves, my fingers still froze to a state of barely moving. Both the sign labeling the pass itself and the sign telling of a major ascent were missing, so the descent actually snuck up on me.

Luck was on my side, as a curious couple saw me, alone, on top of the pass, next to the turnoff to the Mt. Evans Scenic Byway (the road that can take almost anyone to the top of the 14,000+ foot Mt. Evans in the comfort of their automobile), snapping photos like this one, 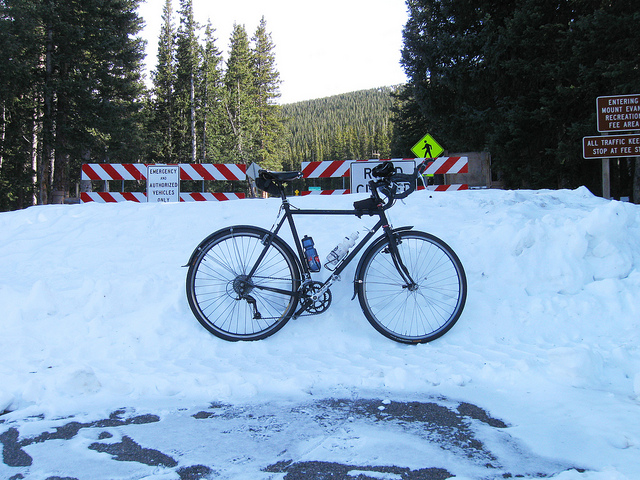 And offered first to drive me to Idaho Springs (which I kindly didn’t take) and then offered to simply allow me to hang out in their car with their dog for a few minutes, which I gladly took up.

Saved me, as in a few minutes, my hands had warmed up enough to go the few thousand feet down into Idaho Springs. Being a North facing road, I was expected a lot more snow drifting on the road and a little bit more difficult conditions in getting down.

But, getting down I did, taking very little time. Warmed myself up with a fancy coffee drink and tried (and failed, in oh so many ways) to make a little video update, which you may laugh at, here:

The people I met in the car also gave me their number to call, in case something happened on my way down, so I called them to let them know all was well. The call was cut short, as they were racing to an animal hospital. The dog that was with them on their own cross country ski trip had tragically fallen ill. They called me later that night to tell me that it had, sadly, passed away. It had a good last day, romping in the mountains. I guess a tumor was to blame.

Chased around town for a sweatshirt, as I had foolishly forgot to pack on, only wearing two polypro long underwear tops and a waterproof shell! Found one across the street for $10 and grabbed some chemical warmers for my hands and feet at the Safeway and made it back East. Floyd’s hill, as always proved to be a very hard little hill to crest after being so worn down from 14+ hours in the saddle, but nevertheless, made it through and back home at around 8:50pm.