Woke up today with little sleep, perhaps two hours. Unplanned sleep deprivation training. 5:00 am. Snooze for fifteen minutes then up and about. Planning on biking/hiking trip. Let’s go to Boulder, I thought and then hike around. Wonder if you can get from the small, Southern Peak, to the Small, Northern Peak? There must be a trail that allows me not to backtrack. I guess we’ll find out.

What to bring, what to bring. Too many things needed, guess I’ll bring an actual pack. My back already wincing with the idea of riding with that thing. They make bags that go onto bikes for a reason! It protests. Bringing along some hiking shoes, hiking sticks, camera, food… that’s… it, it seems. Somehow a hiking pack was still needed. Probably because of the camera. I’ll have to get one of those little ones that still takes great big pictures.

Ah, and clothing! 6:00am, when I’m leaving Denver, it’s freezing! And I’m expecting it to get above 50 degrees F. by mid day in Boulder. Cripes, that’s a lot of layers. Still, have to make sure to account for the various unpredictable weather of the Front Range. Be ready for both rain and snow. And well, perfect weather too, I guess.

Getting away shortly after 6:15 am, I get a half a mile away before remembering I forgot my helmet. And gaiters, but the hell with those. Turn back for the helmet, though. Every bike crash you get into, they always ask if you have that pesky thing on. Back at the house, trying to figure out where I left that thing.

Took the bike towards Boulder from Denver. Strolled around Stanely Lake to get a bit of, ahem, “Dirt Time” on the bike, even though the “trail” is nothing but a service road for the, “lake” – really a large reservoir with a dammed up North side.

Made it to the coffee shop right on the Table Mesa shopping center without incident at around 9:30 am. Three hours to get here? Slow bike and heavy pack, I tell myself. That and I should be saving my energy for the rest of this day. How long is it going to be? Don’t know! Even though I spent a few years living in Boulder, I never found it necessary to explore the myriad of trails nestled so close to town very closely. You can literally just walk up any of the major thoroughfares West and hit a trail head. A tragedy. In fact, I probably only ever climbed up Bear Peak a few times, before calling it good.

Bear Peak from the café

I’m drinking my espresso and looking at that peak, right in front of me. Yup, I’ll climb that, and right before South Boulder Peak. That’s easy enough. Then, try to find a way to get to Green Mountain, a little to the North. With that done, I’ll just ride home, hopefully, before the sun sets. When’s that again?  Details, details.

A little coffee before we got out on a long hike.

A brisk ride up the hill towards NCAR, which conveniently has a place to lock my bike and a trail head outside the building. I redress for hiking and use the other convenience: the restroom and start the hike. Luckily for me, the trail head has a intensely detailed map of every single trail available. Unlucky for me, I can’t remember crap, being this tired. I try to make a plan on where to go and what to do. I even make a little video of the map and what to do when and where.

Useless. Within an hour, I’ve made a wrong turn and have to backtrack 15 minutes to my turnoff. The trails are well-signed, there’s just so many of them. Why, I wonder?

I take the Shadow Canyon trail up South Boulder Peak. I’ve only gone down this trail, but going up proves difficult. Steep little buddy of a trail. Slippery, too. The trail deserves it’s name and snow has found refuge on the trail. Luckily, I’ve brought what looks like a beefy rubber band concoction with springs attached to it. This attaches to my boots and is supposed to keep me from slipping. They’re akin to a baby brother of micro spikes, which themselves are a pathetic version of honest-to-goodness crampons. Mine look as if they’re marketed more to the Minnesotan house wife, to wear to and from their large sports utility vehicle, during the harsh winter months. Hope they do the job. I bought them initially to work on the Franz Joseph Glacier of New Zealand. We all had a tiny little laugh about that, in private.

Climbing up, I feel like an defeated old man and have to stop continuously to catch my breath. I tell myself, I should be in much better condition than this. I’m exhausted, but not fatigued. It’s the lack of sleep and I can feel myself fighting that off, as I go farther up. So strange to almost fall asleep, while exerted so much physical effort.

Reaching the top (these are quite tiny mountains), I eat a bagel w/cream cheese. By this time, I’ve stripped everything, except a pair of long underwear (top) and hiking shorts (bottom) – no underwear. I find a sloping rock, wrap my shell around my legs.and take a half hour nap, hoping that does the trick. I also hope that no one else comes up here and spoils my solace of sleep on top of the mountain. Good chance there won’t be. Pretty quiet on the trails, today. People probably working, or something. 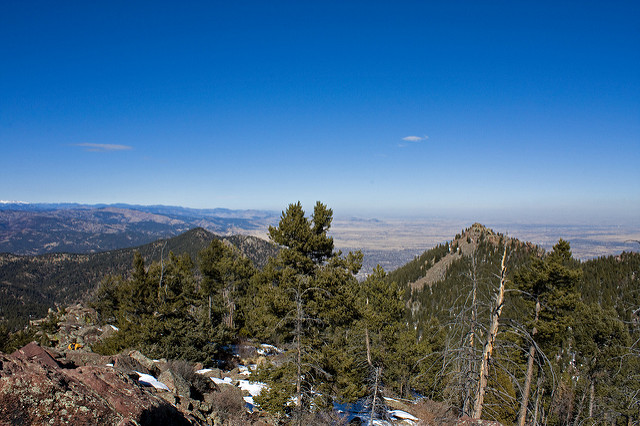 On South Boulder Peak, with Bear Peak and Green Mountain in the distance 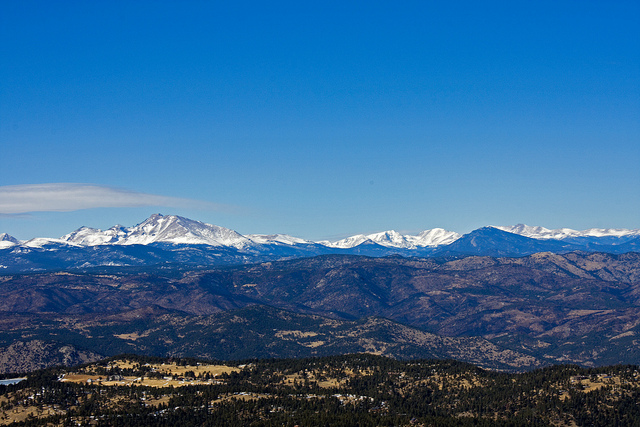 Longs Peak looming in the distance. Wish I was on the summit of Longs in this perfect day.

At 2:30pm (I have no idea how it took four hours to get up here), I make it out to Bear Peak. Close enough, it only takes a half hour to summit. I dawdle for just a bit, take some stupid photos (and one or two good ones) and descend on the west side of the mountain for what I was looking for, Bear Peak West Ridge, which should deliver me to Green Mountain, with a small trail crossing, which I’ve already proved well enough I can, hopefully, figure out. 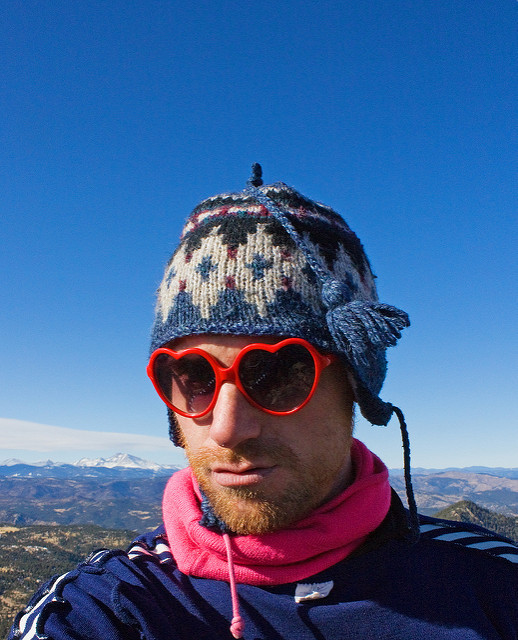 Autoportrait on top of Bear Peak

I take the time into small consideration. Being ~3:00pm, even if I descend now to the trail head, I’d get back to the bike before sunset, but still would have to ride home. These trails are sincerely urban, though. The trail head itself is maybe two miles to the bus stop that has service all the way to Denver. I guess that’s a plus for sticking so close to population. Feel a pain to take the bus, having a well-tuned and perfectly good bike at my disposal. We’ll see how the engine is fairing in a little while.

A few hours later – bang! Green Mountain summited, now to get back to the trail head. But I guess, how? One way would just go back the way I came, until the Fern Canyon trail, but that would mean backtracking and that’s the no-no of this hike, so I guess I’ll take the route the goes *around* all of the Flatirons. That’s… the only other option, really. 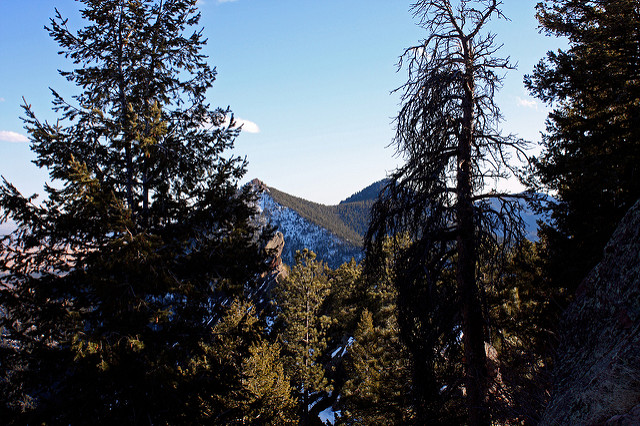 Bear Peak and South Boulder from Green Mountain, amidst some trees.

That also puts me at another squeeze, since that route goes West, then North, until it exits the area, I need to go South back to my bike at the trail head. OK, the sun is now definitely starting to set. Let’s do it.

The trail down is surprisingly snowy. Not just patches of snow: snow everywhere. North facing. I slip continuously. Much fun, so long as the trail isn’t too precipitous. Meet up and pass a few rich teenagers who aren’t having half the trouble I’m having with far less gear. I’m not 30 yet. Damn them.

Get to the trailhead… some sort of trail head as the sun sets. Off of Flagstaff Road. That means, I’m not home yet. Find a lot of silly little trails that take me to the main, Mesa trail, which leads back to the NCAR trailhead. Flick on the head torch to find my way back to the bike. Somewhere on the trail, a flash! of light takes me off guard, as if someone just took my picture. I think I tripped a motion sensor camera, used for tracking activity of wildlife. Just my ugly mug, gentle scientists, sorry about that.

I am now exhausted, but decide to ride back home. Besides, that was the plan, as always. The clock in the office of the pretty girl next to the bike rack says it’s 7:00 pm. Seriously, I’ve been out here for almost 9 hours? Well, I wouldn’t have guessed it was going to take this long to traverse three tiny little mountains. Must be a slow hiker, today.

Night riding back to Denver is mostly uneventful, except for getting lost after passing by Stanely Lake again. Found myself on a major road: Churchranch Blvd. directly in the throes of the awful suburban sprawl that is Westminster, a terribly ugly town without much to offer, except strip malls and fast food joints.

Took a right onto Sheridan, which is usually a road of DEATH for the noble cyclist, but it’s the only landmark I know well enough, and by 76th street (only 4 miles away!), I know the route well enough again. At around this point, I completely run out of gas. My legs do not move the pedals like I would like them to do, except if I am in the lowest gear of the bike.

This is not good.

My best strategy in this scenario is to simply, “pretend” I can pedal much fast than I can and trick my body in doing what I want it to. After a pit stop at the local Wendy’s (shutter),  It seems to work.

I land at my front door at 9:30 pm with an aplomb. I bask on the living room floor for a while, until I realize it would be much better to bask in a hot bath instead.