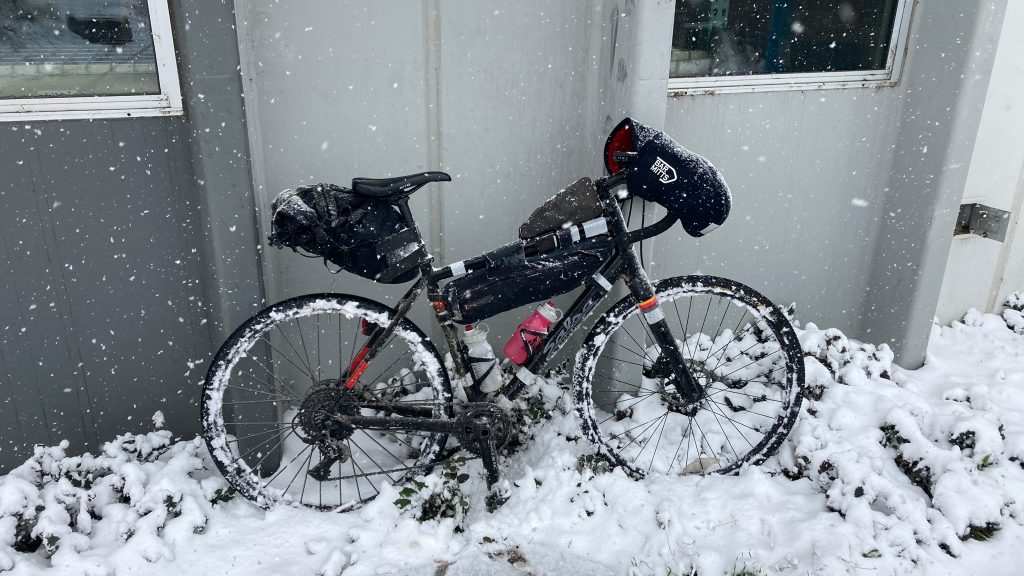 A pretty frustrating week. The body is just so incredibly tight and isn’t happy. Most of it is thankfully just tight muscles and nothing else. I’m still adapting to my new work schedule/load and trying to figure out how to fit in all the things I want to do around it, while also dealing with the ennui zeitgeist. I told myself not to beat myself up about not getting my workouts in – I don’t have any solid goals I need to hit in the next week, so there’s really nothing to worry about. Even without having any structured training rides, I still clock 100 miles of riding, just with commutes and errands.

Conditions outside where terrible – wet snow! I rode to work and that’s about it. That was enough!

Good session for me, even though I felt like total garbage. Finally topped an .11b on the lead wall, after a few sessions of trying. Felt like getting back to a previous highpoint. It’s just fighting that pump. There’s lots of ceiling to explore.

Ran into THE Annie Weinmann aka First Flatiron FKT holder, and after hiding my fanboy-ness towards her, asked her if she wanted to hike up Green with me. She keeps quite a pace that I barely could hold on with, despite the fact that she was recovery from a broken back from an accident during a climb up the Diamond of Longs Peak. BEAST.

Short session for me. Highlight was finally getting another V7 – a stemming problem with small small footholds. Like many things, once I figured it out, everything seemed pretty easy. But that’s two V7’s in a few weeks, which is good progress for fat + old me. But again, it wasn’t a powerful problem, and I really leaned on technique to get me up. Other highlight was another new V6 – another tricky, balancey stemming problem.

I whole lot of nothing. My body has been feeling pretty miserable between little windows of performance. Best to maybe just roll with that.

Not looking for sympathy, but my plan was to go to the gym to boulder, but I couldn’t get in b/c of occupancy limits. The gym is currently first come, first serve. It was such a windy day, I wasn’t looking to do anything outdoors.

I spent the rest of the day jamming on a cheap back massager on any part of my body it would fit.

Another windy day. Riding to Gregory Canyon TH, I wasn’t sure what to do, other than run, which isn’t something I wanted to only do (or even primarily do). Getting blown off a flatiron wasn’t really high on my list of things either. At the very beginning of my hike up the hill, someone mentioned the Amphitheater to another hiker, and I thought, “Hmm, haven’t hung out there in a while, why not start the day there?” So that’s what I did.

I got re-initiated with T-Zero, and ended up doing about 6 laps on it, each time getting more familiar and faster.

I moved onto the other classics in the Amphitheater, and made a little circuit of it all – up the Second Pinnacle South Face, down the NW Corner, then down again the Standard Inside East Face and up 2nd Pinnacle, NW Corner and Southeast Arete, then back to T-Zero.

And that really was most of my day. As the light was really fading, I took a hike up higher up the trail to take a look at a boulder I had my eye on before, but didn’t have rock shoes with me. Today I did. This boulder doesn’t seem to have ever been summited – too much lichen on some features, but it may go at V6 or V7 – seems hard. I def. think a crashpad would make things a lot more chill.

I’m far from sending – I can’t do the start, nor the end.

Since I completely forgot to bring any water from home, I called it a day after the sun set. Pretty chill day!