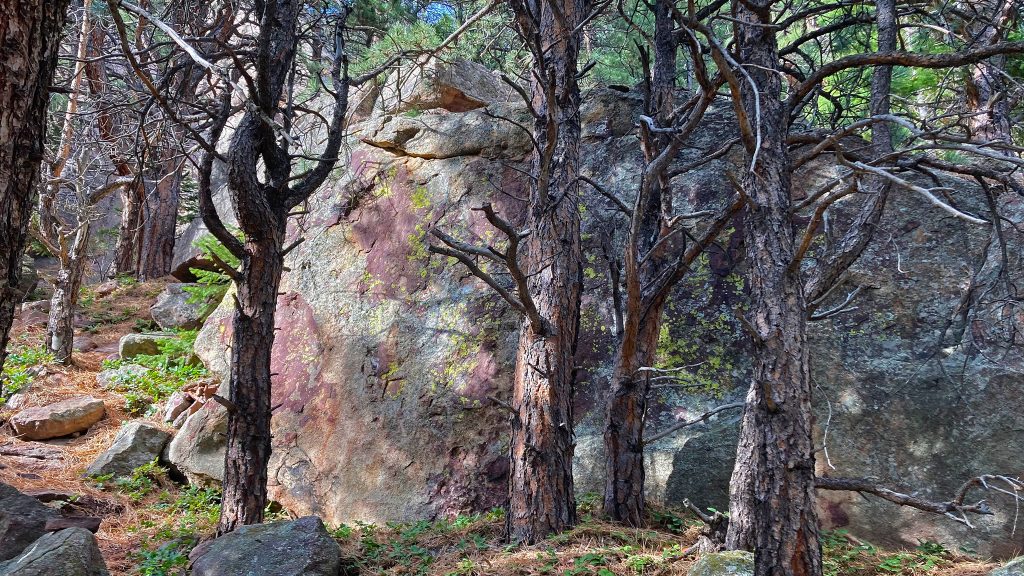 A pretty good day, but no real standouts. Starting to rack up multiple V6’s per sess, but no V7’s in my grade pyramid as of yet (and certainly no V8’s).

I hemmed and hawed about going out – the conditions (smoke, mostly) are just so bad, and even bouldering indoors was leaving me wanting to catch my breath after some of the harder problems. Usually not a good sign that I can actually do a run.

In the end, I decided to go for it. The bike ride up to Chautauqua wasn’t entirely pleasant, but once at Gregory Canyon, I felt good enough – helped I brought a thermos of coffee.

I took my usual COVID route by starting up the Amphitheater trail from the Gregory Canyon TH, then cutting south into the woods before the talus field below the South Amphitheater Pinnacle. Climbing up to the Col that’s right below the start of the Spy, I pick up the remnants of an under maintained trail that eventually becomes the Spy Express Trail, bop onto the 1st/2nd access trail for a second, until the very first switchback and leave the trail descending down to the start of Freeway. I did Freeway, then hiked cross country above the First/Second Flatirons, meeting up with the E. Greenman Trail to the summit. It’s not fully off-trail – I could make something even more contrived, but it does a good job. I wish the Gregory Flatironette was inviting from the north, or I’d just take that up to some other linkup.

I took Greenman/Saddle down to the trailhead. Pretty easy on the effort, in an effort not to fry my lungs. No Strava/Track, as the phone app seems to be woefully broken at the moment.

Quick trip up Hogback Ridge outside my door. The smoke terrible this morning/afternoon, but seemed to clear up a bit by late afternoon. Not the most stoke, but as soon as I took the turn off of Lee Hill and was on a trail, my body felt good-enough, so my pace quickened. By the time I got to the climb itself, it seemed realistic to just try to PR the small loop (which I did). The run back is all downhill and it’s fun to feel like you’re flying.

A somewhat unfocused session not feeling my best, until I mindlessly worked on some new-to-me set problems on a less steep aspect from what I usually do. The V3 up took a few tries. The V4 a few more. I’m glad the problems seemed to be set stiffer, but it isn’t the best for one’s ego!

I couldn’t make any headway on the V5, or the V6, but surprisingly, the V7 seemed doable, so I took a bit of time to work on it. Somehow, I got it together to top it at the end of my session. Not a very powerful problem – and good: ’cause I’m not a very powerful climber; but it was techy and needed a bit of compression strength, so I had enough tools to get it done.

So yay(!), first V7 in months. My progression pyramid is squat and flat, which is curious, but for this year – I mean: I’ll take what progression I can get.

I was excited to get out to Chautauqua, but didn’t quite know what I wanted to do. I forgot my approach shoes at home, so I thought I’d just do some mindless laps on Freeway.

The first lap was a nice walking meditation. I decided to descend to the south, partly to check out an easy climb (Southwest Crack) I may attempt to solo some day. I think I’ve found it before, but came out empty trying to just identify it today.

My momentum kind of fizzled out, so I just wandered about. I hiked up to a beautiful offwidth crack I’ve eyed a bunch of times from the Third, and although short, seems doable, and not so hard. I’d try solo it but the landing is atrocious. I’d need a BD #9 or something to protect it! But literally, just one. There’s a rail at the top of the OW that will take you left into I Bleed though, and I’d like to link those two things up.

I made my way down the Third Flatiron access trail, and was sucked into trying the A-1 boulder for a while – no luck (still!). Maybe with better shoes. And chalk. And not having 2 1/2 hours of bouldering already in my forearms!

I did wander to the Sputnik boulder and topped that a few times to save face.

Did another lap of Freeway and made some better haste down – that’s where I heard what seemed like someone trundling rocks down the flatiron. But there was also a LOT of shouting, which made me worried that someone had fallen.

I got things in high gear and raced back to the start of Freeway, then started up. I took the Dodge Block line – there’s a lot of terrain to the south of Freeway, and I was worried someone could have fallen into a dirty gully that-a-ways. About half way up, the fallen was found. They were surrounded by a bunch of people and literally I meet SAR at almost the same time, so my help wasn’t needed. A little shaken up myself, I left the scene, topped out, and ran back to the TH.

It’s strange to have such a casual day myself of just blundering up an easy (to me) flatiron or half-trying a classic boulder, eyeing lines for the future (or not, whatever: it’s just childhood imagination I’m letting out to stretch) and then having to race up to perhaps find someone deceased. Ugh.

Rest? I think? Nothing in my logs. Lazy Week! The crushing existential pain of the wildfires ripping through RMNP do not help.

A fairly low intensity session on boulders that were lower than my limit, maybe to fill in some technique gaps and fluff up my grade progression pyramid (as seems to be the theme, this week). Hell of a time on one V3 that features thin hands and a big reach – I’ll have to try harder next week. Topped a difficult V5 stemming problem that had giving me the fits for a few weeks, so I got my just deserves and topped another awkward V5 stemming problem. To me, sounds like I just need a break for my body to catch up, as I’m not working at my max strength.

Afterwards, it was time to take in the last wonderful day of autumn, as snow was definitely on its way. I had some big linkup plans, but after hiking up Gregory Pass, I completely forgot them, and jumped onto some silly boulders – the kind you can do with trailrunners on.

There was one boulder I have had my eyes on – the highest and proudest one just east of the pass proper. It doesn’t look hard, but it’s certainly tall enough to be feel legit. After warmups on some silly rocks, I felt this line out, mostly to see what falling would be like. With actual shoes on and a good but narrow landing, it seemed worth my while to give it a go. It’s certainly not a classic, but I may start putting it into my circuit, since I’m up this pass all the time, anyways.

Afterwards, I descended down for an easy lap on the First, which was indeed relaxing, then down between the Second and Third to… perhaps do a lap on the Third, but I again got sidetracked with some boulders. The first was a tidy little slab problem with small holds, that I actually very much enjoyed. I may add this boulder in, as well.

Then, I took some time to work on what’s turning out to be quite the project (for me): a small boulder with a bulge you start with an undercling. From there, just try to top out the boulder! I’ve not found a way yet, despite the multiple good holds on the side, and top of the bulging out rock. Took some good falls that banged me up pretty well, and when I finally admitted defeat, I was limping down the difficult terrain. Mostly my big toe was protesting, but my shins were a bloody mess, and I fell on my ass at least once.

Seeing the time was already getting far gone, and me without a headlamp (or bike light for the ride home), I had to make a decision: lap on the Third or try some more on the A-1 boulder. Seeing I’ve done the Third many times and the A-1 boulder never, I went with the latter. With little to show. I’ll have to one day hop on this damn thing somewhat fresh, but who knows when that’ll ever happen? I did managed to top the boulder – barely, from a standing position, but not from the start.

After that, I hobbled home.

A brisk walk in the snow, but mostly time to sleep in with all the dogs on the bed, as the first real snow of the season fell.