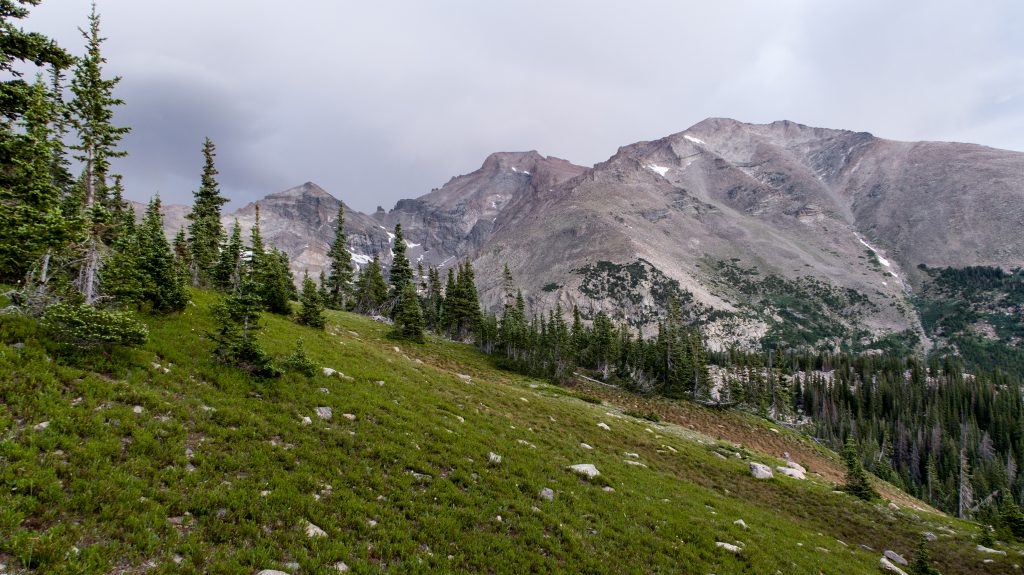 Oof, big day. Plan, executed fairly successfully, was to recon the mountains found on the Continental Divide that can be accessed from the Wild Basin TH. One of the goals this year, given the state of the world, was stick closer to home, and explore the mountains near me. A big project for me may be to do something like the L.A. Freeway route, or a mountain ridge fastpack between Milner and Berthoud Pass. This stretch of the Continental Divide does involve some technical bits, which if I tried to figure out on the spot, would make the traverse slow to a crawl. And since these mountains are so close where I live – close enough to ride a bike to and back, I might as well suss things out.

Mt. Orton – not really on the divide, and really just a bump on the gentle slopes up to Chiefs Head. Fun to tick it off, and a wonderful place to see the entire route for the day.

Chiefs Head – from Orton, Chiefs Head is an easy talus hop to the summit. Orton is the junction between L.A. Freeway and Milner-Berthoud Traverse. For L.A. Freeway, one takes a circuitous sneak from Pagoda to Chiefs Head – really one of the big cruxes of the whole line. From Milner, you’ll have to traverse from McHenrys Peak which itself goes at 5.4 to get out of the McHenrys Notch.

I’ve done both with Peter during our Walk in the Park, which traverses Glacier Gorge from the Black Lake TH. While I was on top of Chiefs Head, there was a rescue mission happening in the Park; a helicopter from the Air National Guard was extracting someone who had fallen from McHenrys the day before.

Mt. Tamina – another easy talus hop to this small point, kind of juts out.

The Cleaver – this was… somewhat of a surprise. The north ridge of The Cleaver is overhanging and pretty desperate to attempt in fastpacking mode. There’s an easier route to the summit just to the west of the main north ridge. I didn’t have the muster to do it on this day – guidebook rating is 5.2, but this could be a bit of a sandbag. An easy, Class 3 ramp system is found on the west side, and its summit can also be attained in this way. I don’t know if this is something I should be worried about. Matthias, on his LAF run took the technical route; Kyle on his run seems to have skipped it altogether.

Isolation Peak – from the Cleaver, it’s another easy talus hop (there’s a bit of a theme going on, here…). Isolation Peak is a wonderful place though, as it’s the farthest peak from a paved road in the Front Range, although this is only ~6 miles, which is somewhat depressing. RMNP is NOT a big place! I enjoyed my time on Isolation immensely, but it was short lived, as a storm had caught me, making me run for cover.

Time to get down, which was the real crux of the day. I had some… sort of information on how to get down, but my Plan A (Cony Pass) and Plan B (down to Junco Lake) didn’t seem to be realistic. So, I resummited Ouzel, and went down the north slopes of its east ridge, which worked fine. Amazingly, it was still daylight, and I made it back to the trailhead by 10:00pm. At that point, my body protested, and I ditched at the TH (sorry RMNP).

I for some reason decided to take the road from Ward home, which added quite a bit of elevation gain to an otherwise easy ride home. Because of course I did.

I made it maybe an hour and a half. Just allowing my body to get used to bouldering again.

Green via Freeway, my usual jam.

Made it almost two hours, and topped a V6 for the first time in months! Coordination is coming back, albeit slowly.

Evening rode for a quick overnighter near Ward, than up to Brainard Lake in the a.m.