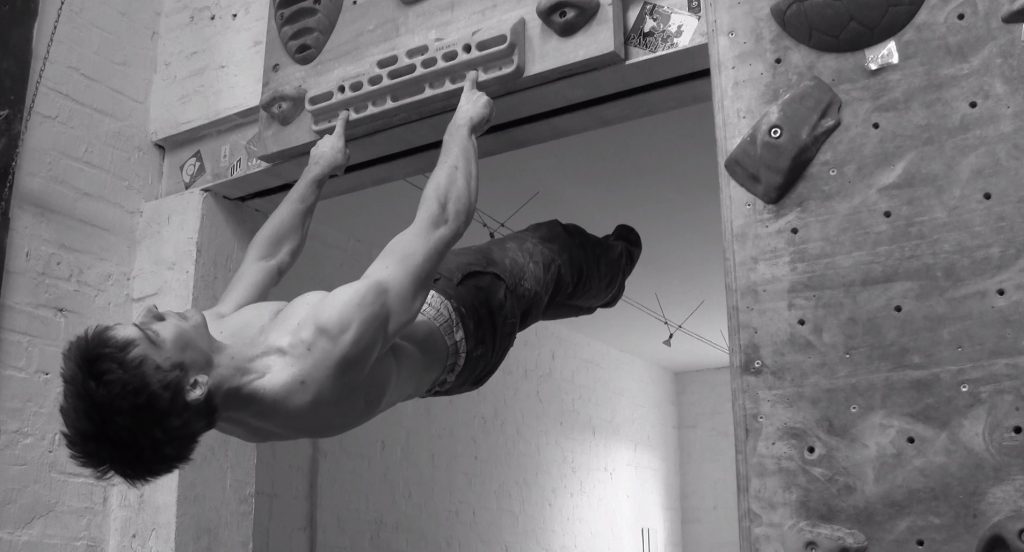 Good-ish sess., although nothing very interesting accomplished. Left middle finger still touchy. Hard to hold back but trying. Fumbled on a V4 I’ve topped before with Lynn Hill (swoon).

My theory as to why I’m doing this is to build up strength in everything but my middle fingers, in hopes to quicken the time to come back to full strength. Hanging statically from my index fingers seems as if it’s a reasonable thing to do, but it is not something I can do at all. It’s still pretty hard even when taking 50lbs off using a pulley system. Pulley system is also a total PITA to work with, so I’m not using that for the foreseeable future.

Also did some hangs with pinky/ring combo, and rather than use a pulley to take weight off, I just assisted myself by putting my feet on a box below me, and adjusted the amount of assistance by feel. This will work just fine for what I want to do.

I’m not even doing pockets yet – these are hangs on the jug. Quite a relevation on how weak fingers in isolation/semi-isolation are!  Writing this a few hours after the sess., I do feel pretty sore in the forearms, so maybe this is a worthwhile use of my time. Being a fairly “heavy” climber, finger injuries seem to happen often enough that any pre-hab I can do is probably for the better. The index finger works seems like there also could be some good crossover for finger locks.

pushups/dips/handstands. Probably some of my best handstands in a very long while, so I’m happy that’s coming back.

Good sess. – felt a little sore actually from I guess Monday? Slow warmup on lead, a few 10’s on the lead wall. Climbed the fists/hand crack w/o tape 2x for the first time, so that’s nice. I guess the new thing I learned is that it’s best to stick your hand in, then trust the feeling that you’ve got a bombed jam, rather than think you can look at your hand and somehow negotiate a good jam.

Jumped on a .12b on TR and worked that a little bit.

Still working on index fingers only, then pinky/ring finger combo. Still seems like it might help. I’m inspired by this video of Jan Hojer doing a index finger-only front lever, which is all sorts of insane.

Usual round of planks, plus some bouldering routes where I’m purposely cutting feet

Nice run. Easy but consistent pace to the start of Fern, then power hiked the majority of the route to the top of Bear. I only used screws in my shoes (although ‘spikes in my pack), and parts of the trail were a bit difficult to negotiate, as the top of Bear is quite steep and the trail is pretty blown out. Felt pretty strong – Strava tells me I’ve only done it once faster, which I find hard to believe, but my powerhike must be on form.

The backside trail was in less than ideal conditions, so took a bit more time than I would have liked, then up Green Bear to the West Ridge, which I managed to do, but powerhiked the rest of the route up to the summit from the trail junction.

On the summit, I took a little break and almost cut my run short, but I noticed I had only gotten 8 miles in. I wanted to ever so slightly ramp up my last long run, so I rallied, and went down the West Ridge trail to Long Canyon/Flagstaff/Crown Rock as I had planned. Probably should bring some sort of food for runs that are > 3 hours long!

Good sess., mostly on lead. Not too much to report. A little unfocused on a few things, and felt a bit sore when warming up. Def. not at 100%, but hey: feels like training.

Good sess – finger feeling better. Warmed up quickly, then got on a bunch of hard to me 5.12’s I flopped all over on. M’s got a major foot brace, so they’re climbing with just one climbing shoe. Doing a pretty good job with it, too.