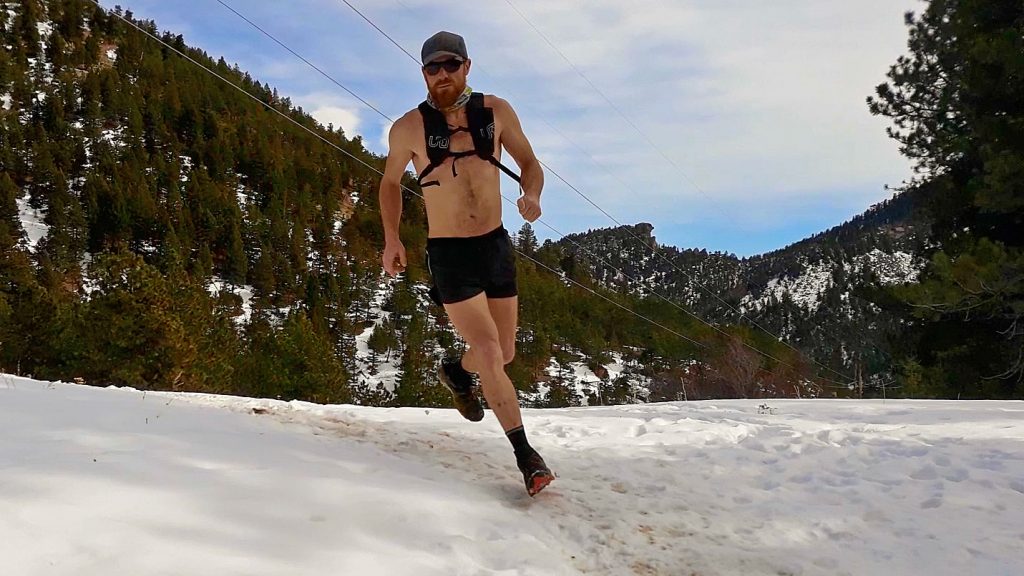 Waited a little while in the morning for a localized snow squall to pass. A little cold, but a good ride, nonetheless. My back sprocket has a lock ring that keeps loosening up which causes my chain to fall off, so I need to find the tool to tighten that up.

Felt a little stir crazy with not climbing for so long, so off to the climbing gym I went to test out the finger. After severely taping it up, I bouldered a bit, but it was apparent pretty soon that the finger was going to hold me back. Kept things relatively light, and ended a bit before I usually do. Kind of a blah session.

Two sets of 100, one set of 125 of my flexion/dorsiflexion balance board stuff (left leg only).

Again wanted to do a hangboard sess., but that area gets swamped with people, quickly.

Felt a little lame I didn’t get any aerobic work done yesterday (gym: swamped), so I thought I’d make this run a little longer than I’ve been doing lately. Ran Mesa Trail up to Bear Canyon, took that to West Ridge trail to Green Mountain summit; down the long way via Long Trail. Good 13 miles.

Trail conditions were fairly exquisite in all places except down low between Skunk Canyon (roughly) and right after NCAR – drainage in that area just isn’t the best, so a bit muddy.

But also almost warm out there, and I took advantage of going shirtless as much as I could (although the wind kicked up on the summit and it was certainly a bit too cold for such shenanigans).

Nice session with Nolan, mostly just one top rope. A few .12’s one-hanged. Nothing big doin’. Got on the hands/fists crack once w/o tape and fell maybe once or twice. Tape helps me a lot, but I’d like to be able to do it without, as I think I’m using the tape to hide bad technique.

Left middle finger felt good-ish, but certainly not 100%, which is why I kept things chill, and only on TR.

Another ride up to Fort Collins, this time to see DeVotchKa! I’ve only seen them once before, but I’ve attempted to see them many, many other times in the past – only to be turned away because of a sold out show. The last time was at a music festival the group I was in was playing at. I stayed long after everyone else left to watch over our piles of gear. Their set that night was a bit weird as it was raining; much of their equipment was being touchy and shortening out. This night’s performance was one of my favorites, much to do with the company I had besides me.

Slowly chipping away at the time it takes me to get there, partly with better route choices, but also just getting a little faster. Still on 42/19, but the amount of times I have to simply coast on a slight downhill when I wish I could be pedaling is increasing.

Climbed with M for the first time – it was their first time climbing since perhaps October, so a pretty intense sess. in some ways. Tired from yesterday’s climb, and I had some terrible rental shoes which were less than useless, but whateve

After warming up, tried the finger crack, then the tight hand crack. Flailing on both quite profoundly. Ah: to be a beginner, again. Lots to learn technique-wise, I’d also like to try these cracks with my own shoes. I’m wondering how the lame rental shoes compare when it comes to protecting my feet when they’re jammed in tightly. I hope my La Sportivas do a better job, but maybe this is wishful thinking. I’ll have to save up quite a bit for some TC Pros – those usually just don’t fall out of trees.

I got an (appreciated) ride home from Fort Collins, as the weather turned a bit colder than I was equipped to handle, then snowed on Sunday. More important things, I guess, took priority.