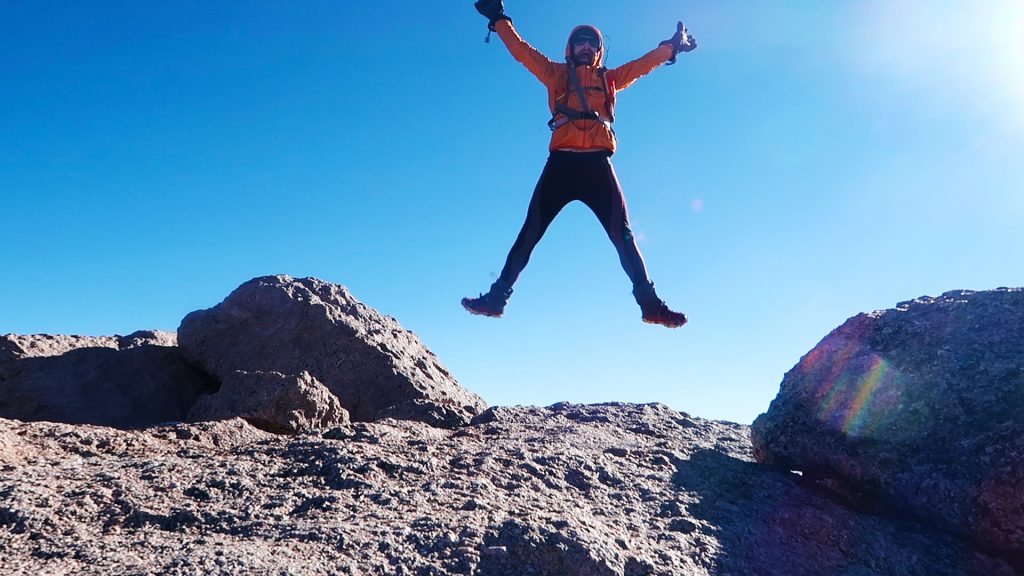 Another new year, another 365 days to fill with summits of Green Mountain! Snowed the day before, but not really all that much. Took Amphi/Saddle/Greenman up, and Long Canyon down. Bumped into it seems: everyone.

Nice sess. Got onto some steep stuff, and fell all over the place. That can be fun.

Did laps of a V4 (and later, V3) in the cave, while also doing my core work, which is mostly different plank variations and such.

Weather window opened up, so I decided to pounce on a trip to Longs Peak! I’ve done this trip so many times, the approach gets a little monotonous, so instead of riding 36 to Lyons, then up St. Vrain, I decided to link a few local trail systems together to get a but of singletrack in before the inevitable 4,000′ ride up to the Peak to Peak highway. Worked out well enough:

From my house, took the Boulder Valley trail systems to Joder Ranch. Joder makes a nice shortcut to Olde Stage Road, and a quick downhill to the southern terminus of Heil Valley. Those trail took me to Lyons, to resup. water and get a cup or two of coffee. From there, I pedaled slowly up St. Vrain, to Peak to Peak. Added ~10 miles to the route, to avoid about 12 miles of highway riding. Kinda worth it.

The sun set right about the time I got to Allenspark, but I only had a few miles to get to my destination to bivy for the night. A little nervous about how cold the night was going to be, but I was absolutely broiling in my 0 degree bag.

Happy that this came together! Nice early start at 4:30 am. Good conditions down below with packed snow until essentially the Keyhole, then minimal snow on The Ledges/Trough, and almost no snow on the Narrows/Homestretch. Made it down pretty swiftly as well – only thing holding me back other than conditions being as they were was my relatively weak altitude acclimatization game.

A fine bike ride home with a somewhat heavy load. Took the Jamestown route home, as pedaling the ECR down Highway 36 from Lyons seemed a little ridiculous. From Jamestown, I was going to take Joder Ranch, but I must have missed the trailhead – it’s a bit nondescript. The climb up the bump on Olde Stage riding south wasn’t as terrible as it sometimes is, and really: once you crest that, it’s basically a coast back to town

Rightfully tired on this day, but wanted to try to get a solid session in. Wish I had a climbing partner to do some easier routes, but I guess I would simply stick with bouldering. Decided to just try to do all the V4’s in the gym. Surprisingly finished that goal in about 20 minutes, and the rest of my session was pretty disorganized after just not having enough gusto to try all the V5’s. Brian showed up after a good break of his of coming to the gym b/c of school responsibilities, so at least I had someone to boulder with.