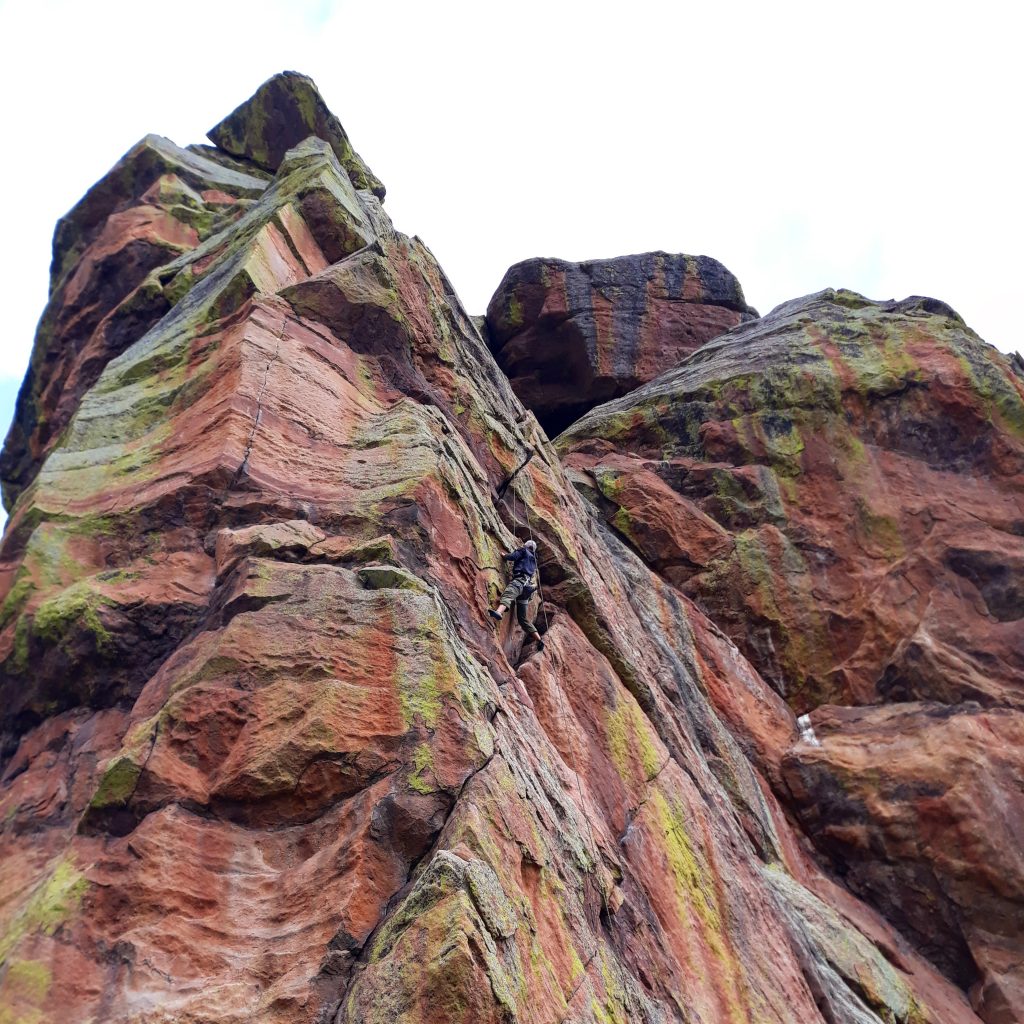 Thought about running to the gym to ride the bike that goes nowhere, but just couldn’t get muster up the psyche to do that. Lots of daydreaming while riding that thing tonight. Future projects, mostly.

Whoo boy, a little more crazy than I was expecting. Saw the last person I’d see all day until I finished on Bluebell Road, only a few minutes into my outing. Set a strange tone…

Freeway was chill, but getting over to the east bench of the Third meant some icy trails and slogging through a very snowed-in boulder field – both of which I guess I wasn’t expecting. Literally fell down the Third descent trail. Sigh. Scrambling up the Third started out easy enough – I took my time to get re-acquainted with the rock, and pick out the best line. I can’t help it: I just love doing recon work for a speed run.

Things got real on the very last pitch, as the wind started wailing, and the holds got thin. I literally was hugging the rock, not wanting to get blown off. The summit of the Third was too windy to even stand up, so I made my way back down VERY carefully, reversing the last pitch in that same wind. Yikes. Thankfully, the rest of the downclimb route was a little more protected, except for the move over the chockstone in the southwest gully itself, but at least that part has holds.

I elected not to do another lap, and just cross-country’d it to the summit of Green. Slow going. The terrain is pretty tricky, with mini formations to navigate up/down/around, as well as a healthy amount of talus, and downed trees, all covered in snow. When I finally hit the trail, I found it to be one degree less than bulletproof ice. I didn’t have microspikes, and the screws on my shoes were shedding at an alarming rate, but made it to the summit fine. Getting down, hmm.

I decided to go down the backside, then via Long Canyon. The trail sees less traffic than most that go up Green, and it’s south facing (for the most part), so I thought the ice levels would be a little less. Turned out I was right. For the most part very pleasant.

After dinner, met up with Chrissy to climb. Chrissy is much better than I ever will be at climbing, although she’s coming back from a broken hand. She pressured me to get on an 5.11d on the lead wall, which I was game for. I’ve never sent an .11c on the lead wall, so it would be interesting to see what would happen. I almost sent, falling at the last clip. Just screwed up my beta – used my right, instead of my left on a hold at the lip, or something. Sure if I give it another go, I can send easily. So that was nice.

Then, worked on my 5.12c proj. for one TR burn: only one fall, then felt pretty good afterwards. Again, just didn’t utilize a key foothold the right way. Hopefully, the next time I’m on that climb, I can do it clean on TR, and can start working it on lead with a bit of confidence.

Then, bouldered. Not much to report.

Not the best session, to be honest. Felt a little tired, perhaps from Tuesday?  Played around on the new set of boulders, and tried to have some fun. Worked a few problems with Rui of the Flatirons Climbing Council. We chatted about the recent presentation he was a part of, about the history of Flatiron climbing. I do love those old black and white Greenman photos of people climbing, 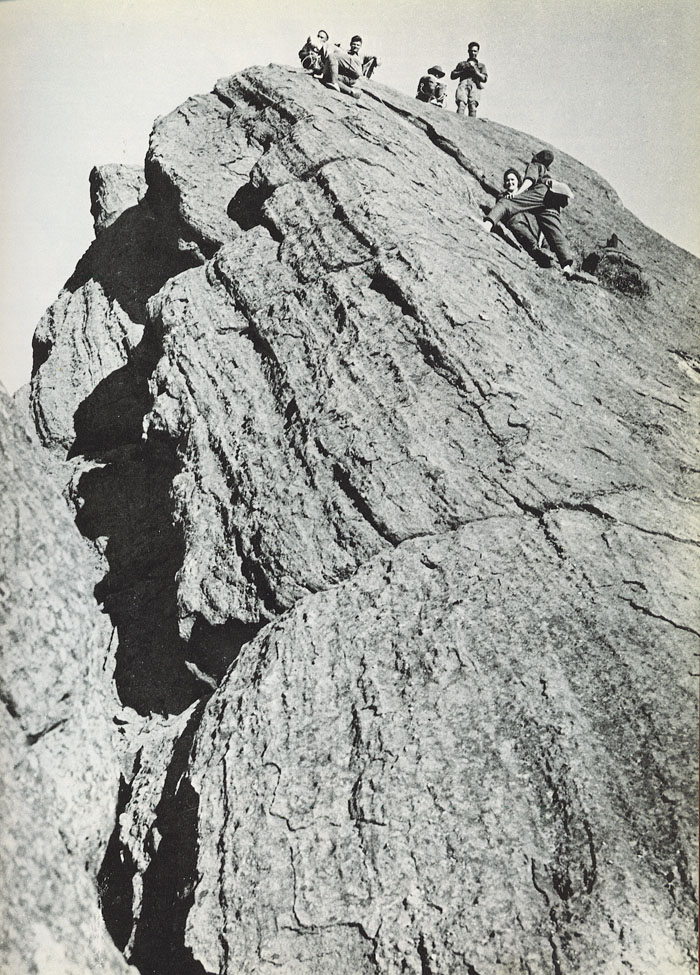 Watched Takashi Miike’s 13 Assassins, which is so good. Slow at the beginning, but the built-up/payoff at the end is worth it. Can’t remember the details of the original film by, Eiichi Kudo but Miike’s is very similar to Seven Samurai/Magnificent Seven: bad guy needs to be killed, outnumbered completely, probably suicide mission, architect the town to make sheer numbers count for almost nothing, judicious use of explosives, and a fool we can all get behind in loving. Actually reminds me of the guilty-pleasure Leonardo DiCaprio, Man in the Iron Mask. I do love me a good swashbuckling tale.

Climbing around the Third Flatiron with Nolan and Troy

The Yarmouth Avenue Crew of shared-living miscreants set forth onto the Third Flatiron area to… fumble around. We brought rope, and some ‘draws, with the intention of soloing the east face, setting a top rope for the Top Ten Flatiron Classic: Friday’s Folly, then move onto working on a sport climb named, Feathers and Stone.

East Face went easy enough – even on a Saturday, we had the whole face to ourselves. Curiously found quite a bit of fixed gear wedged deep in a crack – a #2, and something purple + much smaller. Strange thing was, there’s a massive glue-in bolt not five feet away, so I’m not sure why people are plugging this crack. Didn’t bring a nut tool, so we left them.

Taught Nolan how to rappel, and that went smoothly (we’ve always downclimbed everything we’ve climbed up!). Then, set up a toprope anchor on the last rappel anchors on the Third.

This was a mistake: the climb isn’t doable from this anchor (so don’t do this). Use the single bolt located seven or so feet to the east of the two bolt rappel anchor. I tried climbing Friday’s Folly, but once you turn the arete (crux), it’s not possible to be properly belayed. So, finished up on Saturday’s Folly, which is fine enough.

Back at the anchor, I moved it to that single bolt (it’s labeled, “Friday’s Folly Belay”, if you yourself get confused), so that Troy/Nolan could do the route we decided on, and to completely free up the rappel bolts to rappel off of (although no one came down).

Troy took no time getting up Friday’s Folly, but then we sort of ran out of time, so we packed the whole thing up, and hiked out, not even touching Feathers and Stone. Sigh! If the weather is good next week (it’s not looking like it…), I’ll have to revisit.

Before getting to the trailhead, we took a few burns on a very classic boulder problem called A7, as it’s right besides our descent trail. Even though rated V1, we all got shut down at the crux move to the top. We finished up jogging down with bruised egos (well me, anyways). Ran into Andrew, and his running buddy Mike, noticed my left hand was bleeding from the effort. Good first impressions!

Did a circuit of sorts of just climbing all the V5’s (and some V6’s) on everything but the very overhanging angles. A little tired from the morning, but once I got warmed up and remembered not to be so static, things became a bit more fruitful with the sending harvest.

Finally sent a tricky V5 that starts out with a right hand hand dyno to a high hold (skipping the initial left hand, which is useless), moving to two pinches on the right, and utilizing a very reachy and slippery right foot, which is easy to pop off from. From there, it’s another reach to a pinch. If you can hold two pinches with your arms and legs splayed out in a frog position, you then adjust your left hand to a pinchy/undercling of sorts, move your right hand to yet another, higher, pinch and get to the lip. Could have been the third or fourth day I’ve tried the problem, so happy to finally figure it out. Good setting!

Wanted to continue, but the finger pads on my left hand were quite raw – probably from the A7 boulder, and everything was just getting too painful to attempt. Ending with,

Later, joined Chrissy and watched the Dawn Wall film at her friend’s house, and got super motivated to do some try-hard project next summer. But, what?!