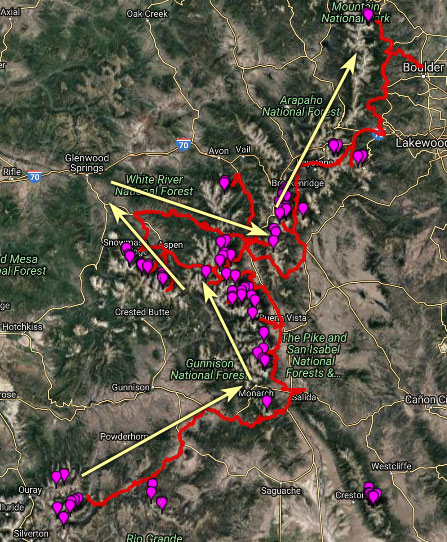 Whoo boy, do I like me some optimizations of my routes! Being not the fastest, strongest, or most, uh, endurance-est person in the world, I’ve gotta rely on my brain fat a lot of the times to figure out the most efficient way top get from point A to point B. I love working on projects like the Highest Hundred, since optimizing the route can have seriously awesome outcomes, like saving a few days, or a few hundred miles by finding a shorter path to the mountains I want to visit.

But, that’s not the only thing I’m optimizing for. I could be out there pedaling my slowly melting-away butt at most any hour of the day or night, so I want a route that’s somewhat safe. I’ll also have a mountain bike in between my legs, so if there’s a dirt route, I’d rather take that, instead of pavement. And if the route’s a classic, well all the better.

Colorado has it made for classic offroad bike routes, as people have been riding bikes on dirt in Colorado for a while now, and there’s two long-distant routes that cross through most of the mountainous regions of the state that are ripe for the plunder: The Great Divide Mountain Bike Route, and the Colorado Trail.

I use these two routes generously to advise where I should go – I know the routes well-enough, and I know they’ve been well-vetted and see a bit two-wheel, fat-tired traffic.

While planning out my route of the San Juans from Lake City, I traced a route ,similar to my Tour 14er route:

Taking the paved Highway 149 to north out to Gunnison, up Highway 135 to Crested Butte for a quick cup of coffee, and then taking the rocky four wheel drive track over Pearl Pass to summit Castle/Cunnundrum. Continuing this road north takes you to Aspen to grab the rest of the Elk 14ers, while going west.

Afterwards, grab Frying Pan Road east out of Basalt which goes up and over Hagerman Pass into Leadville and move in a generally southern direction, bagging the Sawatch.

In the Tour 14er, the southernmost 14er is Shavano, and Buena Vista was the southernmost town you really needed to get to, to head back north to the Mosquito/Tenmile (and eventually Front Range) via paved (and somewhat busy) Highway 285.

The Highest Hundred will require me to go slightly more south to grab Mt. Ouray, and I might as well make a quick trip to Salida to get my bike worked on by expert mechanics, then take the Great Divide Mountain Bike route up and over Ute Pass into South Park, past Hartsel and access Alma to start the Mosquito/Tenmile that way: 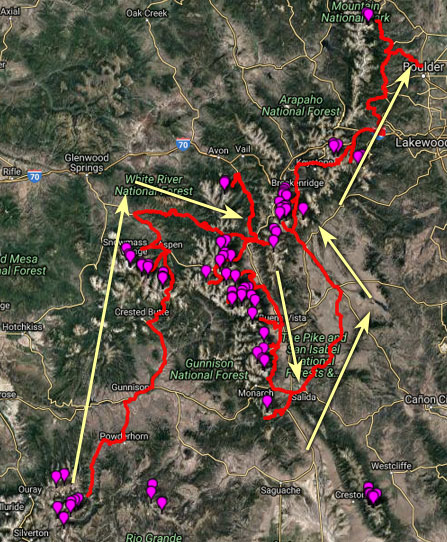 This is all well and good, but as soon as I mapped this all out, I realized the long slog on pavement is really obvious from Lake City to just outside of Crested Butte. Ugh! On my Tour 14er, I started on this pretty early in the morning, and the route is quiet enough where I didn’t feel I was in any real danger – I even saw a lot of road bike touring enthusiasts going the opposite direction! The payoff of all this boring pavement is the chance to go up and over Pearl Pass, which is cemented in local mountain bike culture as one of the first mountain bike rallies (most likely, after a bar bet that it couldn’t be done!).

If you look just to the east of this route on the map, you’ll also notice that you pass a good majority of the Sawatch, on your race to get to Aspen. Wouldn’t it be wiser instead to go to the most southern Sawatch Centennial, Mt. Ouray, make your way north to Independence Pass just south of Mt. Elbert, take that into Aspen, summit the Elks, take the same route back from Basalt to Leadville, finish up the Sawatch, go up and over Mosquito or Weston Pass, and enter into the Mosquito/Ten Mile that way? It would look like this:

Without measuring, that seems like a major distance/time savings. It cuts out the paved highway slog to Crested Butte, and replaces it with a gravel ride on the Colorado Trail’s La Garita Wilderness Detour, until it meets up with the Great Divide Mountain Bike Route (more gravel), which crests ,right at the trailhead for Mt. Ouray at Marshall Pass. Salida is still close enough to visit for TLC, but you won’t need to go up and over Ute Pass to take the GDMBR to Hartsel,  then Alma  which I have to admit maps out to a bit of slog with no peak bagging for a long stretch, since you will be following the Highway 24/Colorado Trail tagging Sawatch Peaks until Independence Pass. Indy Pass is paved, but it’s somewhat of a classic road ride, and strangely something I’ve never taken myself before. Then to to get to Mosquito/Tenmile, you’d have to take Mosquito/Weston Pass –  both classics for this tour.

So what’s the bad news about this route alternative? Although it looks shorter, mapping it out and measuring the distance, it actually comes out marginally longer, with a bit more elevation gain. Surprising! I believe there’s more out and back going on that’s hidden from the mapped out routes. Also surprisingly, the distance from Lake City to the TH for Castle is almost exactly the same as the distance from Lake City to the TH to Ouray – about 100 miles. The same long slog going across to a different range just cannot be fully removed.

All in all: it’s quite a toss up, and wasn’t the major optimization I was thinking it may have been. Still, I’m seriously considering it for my Tour. Weather is beyond fickle, so having these options available could prove invaluable. Good weather is essential in the Elks, and maybe waiting a few weeks for that good weather will mean the difference between a fast tour and a sort of fast tour.