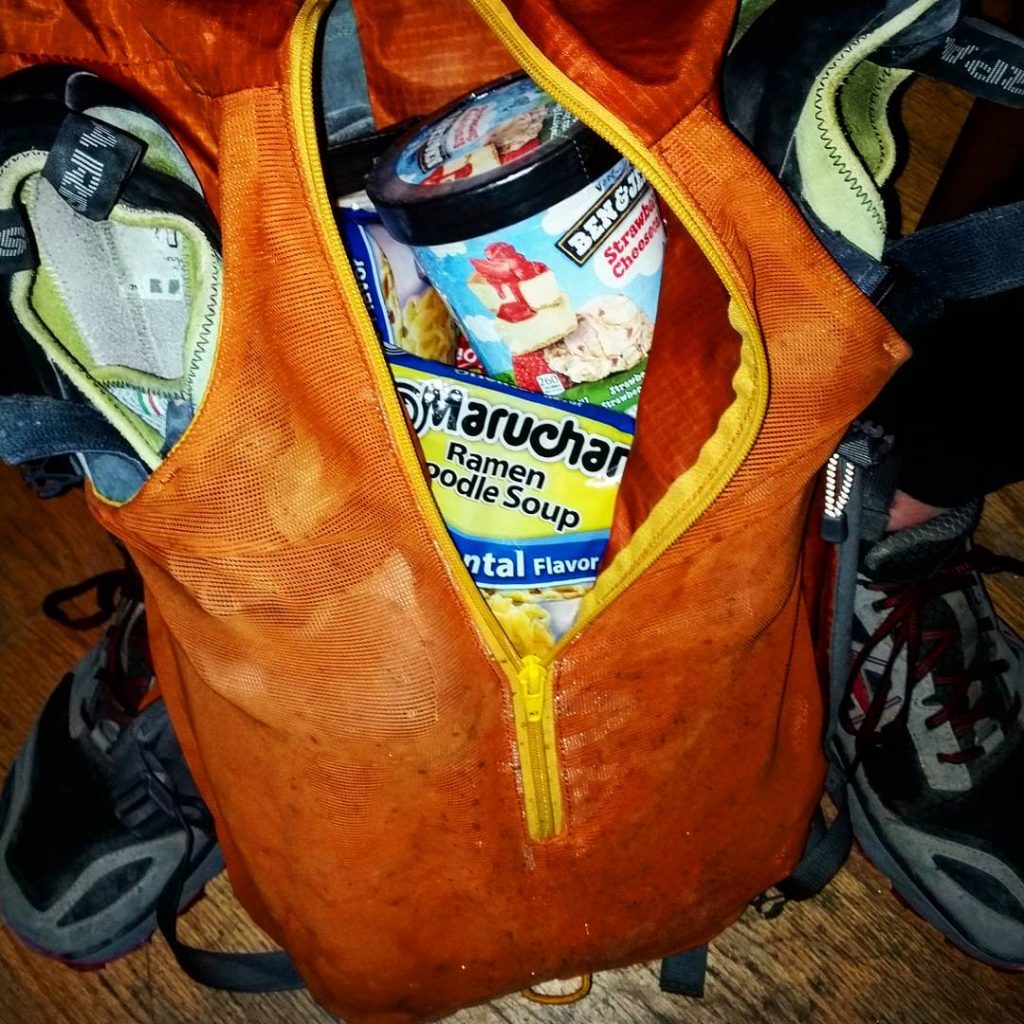 Monday 1/16/17: Run to the gym, then bouldering for 2 hours+, then run back, taking a slightly longer line.

Bouldering went well enough; spent most of my time on the overhanging wall working up from V1 to V3; one V3 that was new to me. Resent a V4 I did last time, then put some work on the other V4, but got stuck on the same move as before. It’s just all very pumpy for me. After giving it a rest, I move to some of the other walls, but it was clear I was pretty worn up by then, so time to run home!

Rolling out of bed with old-man aches made me wonder if the run I wanted to do was a good idea. After hemming and hawing for an hour, I decided to just go out and do what I felt I could do. I was a little confused on why  I was so sore, as the 7+ miles I ran yesterday really shouldn’t be all that.

Started off by running to the base of the Goat Trail on Linden and summiting Sanitas. Felt sore, but alright enough to continue on my plan. Ran down the south ridge “trail” and took Lions Lair all the way back up Sanitas. Goal really was to run 99.9% of it – it’s a very mellow grade once at the bottom of Sunshine. I wanted the mileage today (and this week) but also wanted a little elevation gain in my week too. Also: conditions on Green Mountain were taking people down with its ice, and I knew there would be less of that on this route.

Ran a little slower than I wanted to, as my quads just felt sore, but managed to run basically all of it. In the midst of this section, I realized that running was still possible with sore quads, and tried to focus on running using my hams and my ass, which seemed to be beneficial. The run up Lions Lair wasn’t too draining, and descending was quick enough, despite my sore quads. I’ve been doing  a lot of core work so perhaps that helped with keeping on top of the technical descending in crap conditions?

I was back on the pavement easily enough, and I just had to make it home, somewhat slowly. Very sore afterwards – I think it’s just all the pavement pounding, and actually running, rather than power hiking the majority of my time on my feet. Hopefully, I can adapt quickly, and racing a 55k in almost exactly a month will turn out to be a good idea. I know I’m strong, it’s just getting these muscles to do my bidding. Losing some Winter/baby fat would also be nice.

Felt pretty wiped today. I manged to cobble my single speed MTB back together, so I didn’t have to run to the gym and back. Found a used short cage derailer for $4 at the Sports Recycler, which works well as a chain tensioner for my single speed bike – much better than my actual single speed tensioner. Bouldering sess. was pretty garbage: took forever to feel warmed up, and even then, didn’t top anything harder than a V4. Good problems set up, I just didn’t have it in me. Split the gym without any additional workouts like core, hip mobility, bicycle trainer… etc. Went to the store and actually bought enough groceries for more than a single meal, so that seemed like high livin’. Happy to be riding just a little bit, again. A little shaky in re: to traffic.

Legs felt fine – more than fine, but no time for running/cycling. C is doing an ARC training program block, and I signed up to belay, because: friendship. Her ARC program today was: half hour on, half hour rest – repeated three times. I did some climbing in between while she rested, with little rest between my own pitches, just to really get to climb as much as possible. It really didn’t feel like endurance training on my part, as my first, uh, “block” was fairly easy climbing – easy enough I can rest pretty well mid-route and not feel too pumped. My second block was basically a good burn on a 5.12c for… no apparent reason except the gym was busy and moving through a half hour of routes as fast as possible just seemed too stressful. I followed up with a 5.11d and called it a day.

My hand isn’t 100%, my bikes are broken, I’ve lost a lot of my confidence cycling on the road (and my enemies are in power, etc), but I did a quick 1 hr sess. on the spin bike for one hour/90 rpm/~23-25mph/1,000 calories. The first two metrics are facts; the second are whimsical approximations of which I do not know how they’re precisely calculated. But they’re easy to remember numbers that I try to stick to, until I forget them again and go with other, easy to remember numbers. Easy sess., felt more fresh afterwards than before.

Also did a Hip ROM routine ala: clams, donkey kicks, that sort of thing. I usually blend this with my core routine, but some reason just did hip stuff. Maybe because I wanted to climb tomorrow; most likely laziness.

Had a slightly strange bouldering session – left hand was just hurting, and I was simply trying to make it through the two hours I wanted to work out (because: stubborness!). After warming up, I worked again on an overhung V4:

The problem starts with a traverse left on underclings to a bucket, then a reachy move up to two holds that are at bad angles, then traverses back right to a bad hold to bump to a bucket for your right hand, and ends with a ladder of crimps to the top. Long problem! I get stymied on getting to the ladder o’ crimps: from the last bucket for my right hand, there’s only one small hold for my right foot, and I have to outside flag my left straight out parallel to the ground  right and grab the first crimp with my left hand. I was able to accomplish this a few times, but the next move has me find something for my left foot, and then drop knee my right foot to reach the next crimp – just not strong enough to put it all together. I work on it until my fingers are just melting off the holds, and then I’m sort of left unable to get back to my high point. Maybe next time.

After riding to REI to grab a bunch of gear to make me even more visible on my bike (redundant rear/front blinkies, high vis. pack cover, reflective decals), I made my way to Chat. and ran up Green Mountain via Saddle Rock/Greenman, which was in good enough condition to do that to my surprise. Running the whole track from Chat to the summit without a break this early in the year isn’t so ordinary for me, so that’s nice to be able to do.

I’m guessing it’s a little bit because of the training I’ve been doing, but mostly good pacing. 6 minutes off my PR from the Canyon TH – so there’s much work to do, obv. – like lose 10 lbs. After summiting,  I ran down Green Bear to the trail junction with Bear Canyon, turned right around and ran the easy 1,000′ or so back to the summit, then finally back down the way I initially came up – just to get some more easy elevation running in – I think the Lions Lair running is helped me with pacing myself to last a bit with keeping on running, instead of power hiking. Power hiking easy grades in a race rather than running them is a horrible feeling! and seems like low hanging fruit on what to improve on, if I want to PR on a racing time.

Afterwards, I rode home using the same route I had my accident on, just to test out my emotional well-being. “Damn” is all I could think when I passed the “roundabout” my accident was on. First, the “roundabout” very small: smaller than all other roundabouts on the street. A car doesn’t need to actually slow down to navigate through. Even with all the signs about a 15 mph speed limit through the roundabout, and yielding to traffic in the roundabout itself, it seems pretty worthless at its job of slowing traffic down.

It was also pretty apparent to me, that I was, at the very least, halfway across the intersection before the car even began to come into it. I… I don’t know how they didn’t see me. This is also supported on where I landed after being it: I was traveling east and the car was traveling north. I believe I finally landed on the northeast side of the circle, and walked my now broken bike to the northeast side of the street. Scary stuff – it’s been a journey in of itself to try to process it all.

Didn’t really mean to maybe, just too many things in the way.

Kind of a slow (if not boring, but I’m trying not to use that word…) week coming back from, I dunno, amazingly not being really hurt/dead from a car accident last week. Emotionally, I’m still trying to process the accident, and allowing myself to process it, rather than ignoring it and moving on – which is very easy for me to do. “Processing” to me means: listening to how I feel, taking steps in being more visible to drivers in an attempt to prevent something like this happening again even more than I already am, realizing that accidents do happen, being OK with activities that have consequence, reconfirming to myself how important cycling is to me, finding positive outlets to my anger, worry, sadness, fear, confusion…

Next week, I’d like to get back on the bike, if not for just one real ride; I’d like to run at least 35 miles (+5 miles over last week), and there’s probably little reason for me to want to climb more than 6 hours, but I’m sure I will! 2x hip mobility (instead of 1x) and 2x core routine (instead of none!)