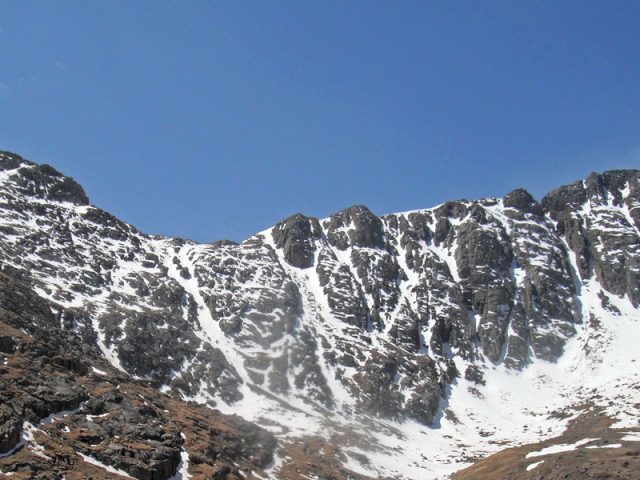 It’s getting warmer and I’m getting a little more comfortable with this sort of travel. This next trip is without trailer, or racks/panniers: as close to ultralight as I can in this dual-mode type of trip (cycling to, climbing from).

This time, it’s Evans. I leave fairly early – but not really that early in the morning, with the goal of riding to the top of Evans, as there’s a paved road to the top, and then coming back to Echo Lake to camp get up very early in the morning and try to do the Evans Egis: which is basically Evans, Bierstadt and all the sub peaks you can see from Denver. Aim high, baby!

No idea if this was even possible, but that’s what this little bike ride was for: perfect recon’ing for the main event. This has to be about my 9th? time riding up this route to the top – it’s no big deal to me anymore, but it’s still fun. Especially when the road is closed to motorists, as it is, today.

The route looks good, although the Sawtooth will be a snowclimb. A little windy, but nothing crazy. We’ll have to see what happens.

I make my way down to Echo Lake and have a terrible amount of time to kill, before going to sleep. Wake up time will be 1:00am – it’s supposedly a ~26 mile hike which shouldn’t be what takes all day: it’s the 11 peaks/subpeaks you need to top out on.

My only flourish to my gear is a paperback copy of the Zen and the Art of Motorcycle Maintenence, so I take it down to the lodge and eat some dinner and wait until the sky is at least a little dark. Afterwards, I make my way to the campsite, which I surprisingly found closed. I camp slightly illegally, and wake up on time, at 1:00am.

My trip starts around 1:30am. First peaks to hit up are Mt. Goliath, Mt Warren and Rogers Peak. The wind is incredible. Between Warren and Rogers, I can’t realistically make forward motion, and have to huddle behind a rock about 5′ high and 11′ wide. It’s the only cover I can see in the dark. I wait until day breaks, taking a little nap, shivering, thinking that stumbling around in the light is better than the same thing in darkness. I think about the idea that I’m going to have to call the trip already because of the wind, but decide to keep going, till at least Summit Lake.

The wind dies down – a little, and the daylight does help me want to keep going. Up the West Ridge of Evans, and onto “West Evans”, a little subpeak of Evans itself. Blustery winds are attempting to rip me off this damn mountain. I make it ’round to Evans again, less than 24 hours from the last time I was up here. It’s somewhat miserable. I take the summit shot,

I decide to mull over the idea of bailing at this point – I got the summit of Evans from Echo Lake – that’s pretty nice. The next part of the route is to go down Evans, almost due North and hit up a few little mounds of rock that someone decided were important enough to name, take a huge turn West and hit up the crux of the trip, the East Ridge of Bierstadt – and then the Sawtooth. The East Ridge route looks incredibly interesting, but the miles of boring hiking before that does not. I’m worried about the conditions on the Sawtooth, and my fatigue at that point, and how the wind’s going to be by then, too. I get to the final little stretch of road and call it. It’s not even 10:00 am, which seems laughable, but I still have a long way back to Echo Lake.

But I start my way down, anyways, just guessing as I go. I hit a snowfield that looked as if it was about 20 meter long. So, begrudgingly, I put on crampons and started down.

But it just kept going, and the more it got, the steeper it became. Every 20 meters, it still looked as if there was 20 more meters to go. In due time, I wasn’t hiking down, I was facing the wall of snow climbing down. Before I realized the slope was at 60 degrees. Tricked into a couloir!

I got down just fine, but kept turning around and dry heaving at the route that took me to the Upper Chicago Lake. Would have never had done that, if given the choice.

Managed to leave my ice axe somewhere between Upper and Lower Chicago Lakes, only realizing this a little bit after passing lower Chicago Lake. Damn it all. A nice little bonus run back to the axe, and back to my left pack, before getting out the basin and back to Echo Lake lodge, which I indulged myself in lunch, and dessert, before making the easy, almost all downhill route home.