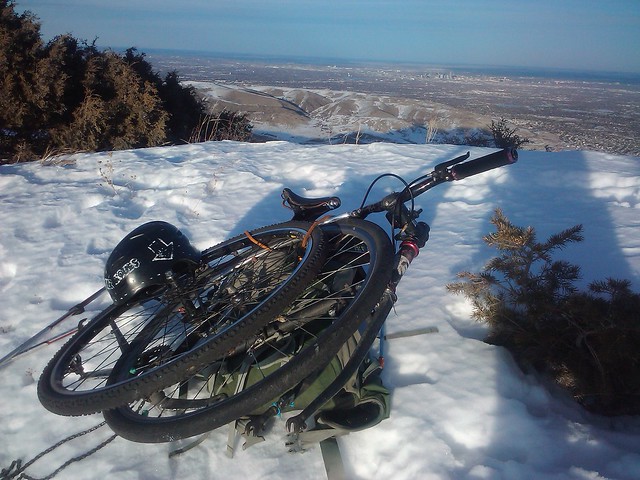 Packing along a bike, just in case…

The Arizona Trail Race 750 is a race across Arizona, from the Mexican/Arizona border to the Arizona/Utah border, with a portage, down, across and back up the Grand Canyon. Being a Nation Park, no bike riding is allowed on the trail, so you need to somehow carry your bike. So, how do you do that,

The AZT 750 is a challenge I desperately want to do, but I may have to simply, “play along” this year, as funds are simply not around to high-tail it to AZ for a week or so. But, there’s always a small chance I can get something together and be at the start line.

So Monday, I started playing along with my pack and attaching a bike to it and hiking up a short trail to the summit of Mt. Morrison – a small foothill directly west of Red Rocks Amphitheater. Doing so is easy enough – my 38L Osprey pack has enough attachment points to haul most anything, including a bike. One option is to actually do just that – already have the pack and no real modifications need to be done. But, do I really want to lug this type of pack 3/4 across Arizona to use it exactly 24 miles? Maybe, maybe not.

The alternative may be to find a smaller pack, but larger than a Camelback-type pack, that has enough attachment points. You’re going to suffer more with a smaller pack though, while hiking. Bicycles are unwieldy beasts when lashed to a pack like this – the frame juts out from the sides and getting everything balanced out is just impossible.

The smaller the pack, the more unweildy it’s going to be. Perhaps one could take a larger frame, cut the bag part clear off – you’re not going to need such carrying capacity for a ultra-enduro race, leaving just the frame and then retrofit different attachments on (big fat velcro straps from the top and bottom tube of the bike frame?) and perhaps fashion a smaller, simple pack onto the larger frame. It would keep the bike frame itself as close to your body as possible, alleviating some of the awkwardness of the setup. The finished product would be Frankenstein’s Monster ugly, but it may be the best ticket in town. A largish, but ripped-ta-hell pack could be salvaged and used this way. Who knows?

Some hastily shot photos of Mt. Morrison, right before sunset,

It is sort of magically interesting to unlash a parted-out bike, put a few things together and roll away from the trailhead, oddly enough. Not sure if I’d call the actually hiking part, “fun”, as the bike frame loved to cling to whatever branches were close by and make scrambling a little more death-defying and tight squeezes needing an alternative route, but it’s pretty doable. I may look and see what sort of lifts I can do during gym-time to help support this sort of awkward weight. I’m thinking dead lifts and even more core work.