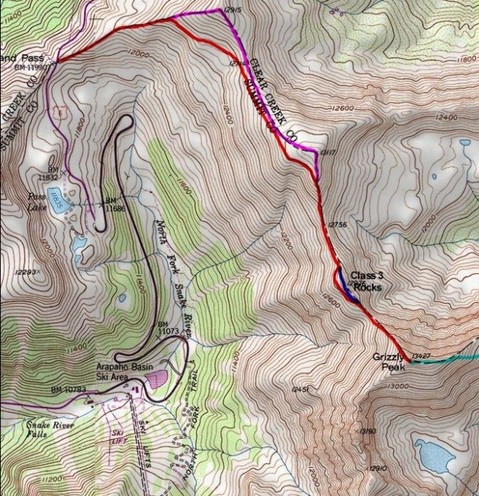 Sniktau -> Cupid -> Grizzly (with a very small chance of Torreys, but time is a factor). The trailhead starts at ~12,000 feet, which feels altogether cheating! Having cycled up and over Loveland Pass a ton of times and hiking East on Grays/Torreys/Flattop/Argentine, I’m curious to see what’s between all this.

Thursday, I had a great job interview in Boulder, so wish me luck as I start Thursday on a trial basis! Fancy web work. This man is one of many talents. It’s been a job search that’s gone on for months to find a fun, sustainable job that I can learn new skills while working at and which can help fuel my desires for further adventures and fun (aka: project become not pretty much broke).

I’m currently in Denver and the job is in Boulder, so I need to make a decision on whether I want to take the bus every day, or commute by bike 60+ miles/day (which for at least the latter, I’d be game!), or move back to Boulder after a leave of 10 years, live in a more expensive town, but be closer to work and well, all the fun trails and mountains, literally right outside my door.

The bus ride to Boulder from Denver was a peculiar one, as it had snowed a ton the night before. I rode to the bus station with many comments my way about my usage of my bicycle to do so. Everything from, “Yeeeeeeah” from other cyclists to, “You’re crazy.” and a sly grin from others. Getting to the bus station at 8:00am, thinking the place would be mobbed with people not wanting to drive their commute turned out to be incorrect! Almost no one there and I shared the bus with only a few other people. Guess most people were telecommuting. Tons of wrecked cars on HW 36, I really couldn’t believe it.

AFTER the job interview, I cycled up the snowy Table Mesa to NCAR and again started stripping down and layering up for a little hike. Late in the day, but my goal was South Boulder Peak. Ton of snow had fallen – at least a foot in Boulder and I was excited to frolic in it. Thought I’d be practically alone, but actually met up with someone at the trailhead. They hadn’t ever hiked the area and really weren’t sure how to get to where it was they wanted to go (Bear Peak).

I’m not one to exercise major caution, but I thought it strange that they’d try this hike, while the trail itself is under a ton of snow, with no one to start a trench to the top. Daylight was also a factor – it’s practically the shortest day of the year. I was questioning their inexperience – even on this city trail, so I offered to show ’em the way and they accepted. Yeah!

So, together, we set out to find the route up Bear Peak, with a little route finding done to make sure we were on course. Much of the route, once you leave Mesa Trail is near some of the sandstone slabs and mini avalanches will fall onto the trail, completely obliterating the route. Fun stuff.

While we were hiking about and yapping and learning about each other and acting as if we’ve known each other for far longer than we do, as friendly people are wont to do, my new hiking partner, stops and starts crying in the middle of the trail.

I asked what the matter and she replied, “It just hit me what it is that I’m doing.”

I asked her… what it was she was doing,

“I have my Brother’s ashes in my pack. He committed suicide a few years ago – after my Mother passed. I’m going to spread them at the top.”

I consoled her a little bit and made sure she was OK (she was) and we continued to go for the summit. She was pretty tired, having been in the mountains a few times this week and kept wondering if the pace was OK. I would tell her that it was fine – that I’m a little firecracker going up and down Hills, but there’s nothing crazy about me – and that I was more wanting to help her get to the top. So we tried.

The going was slow as there was so much snow, but we reached the saddle between the final push of Bear Peak and Nebal Horn, having promised ourselves a break and some munching of foodstuff. I checked the time: 3:00pm

“That’s pretty late, huh? Maybe we should turn back?”

I smiled and reminded her that although I know the risks of things that seem benign – like this little hike just out of town and I’d probably go-for-the-top-what-the-hell, that we were sort of moving slowly and we’d only be moving slower, as the trail got steeper. I rehashed the theory that Bad Things Happen with a series of tiny events that accumulate and multiply and we’re sort of on that trajectory: late start, unfamiliar with the route, deep snow, obscured trail, fatigued body, etc, etc, etc.

“But really, if you want to go for the top, we can – it’ll just be dark when we get back”

We decided though, to end the hike at the saddle. She also decided that this would be a fine time to say goodbye to her Brother, so she did so. I gave her some space and stood around and well, shivered. Once she was done, she seemed quiet a bit more at peace.

We barreled down at fantastic speed and got to the NCAR nature loop in almost no time. I excused myself to have a up and personal time with a tree and when I got back to the trail, well, she was gone. I sort of wondered if I had just hallucinated the whole thing – my mind playing out a role perhaps I should have done myself, but no – she popped out of her own little privacy and I got ready with some snowballs to greet her. 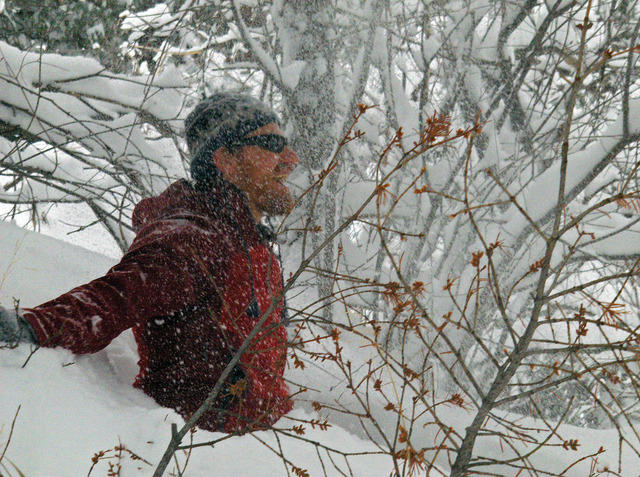 Quite the surprise that I could help out someone with such a heavy load in their pack. All in all, a beautiful and exceptionally snowy day, just outside of Boulder, just a few miles from my new job.