I thought for a minute, but I had no real good answer. “Hmm. Over… uh, there”. I pointed basically North of us, which points to a rocky outcrop called Nebal Horn. “When you go back down, you’ll see my footsteps emerge from the opposite side of the saddle.”

“Thanks, but I’m descending the other way”.

“Ah, OK then”, a little deflated with not being able to show, well, anyone how I managed to get up what’s usually a pretty easy hike, even from almost downtown Boulder. The problem was, I didn’t really know how I got up, precisely.

Last week, I was somewhat surprised I could half fast-hike, half run up Green Mountain in what seemed to be awfully… eh, alright time for a reluctant runner. This day’s hike had a goal wasn’t speed, it was just… anything other than the standard route, as I get bored of things, quite easily. So instead, I pulled a

beta about a route from Harmon Cave to Nebal Horn and then to Bear Peak. Checking out a cave I’ve never seen sounded fun, with perhaps good photo opps.

In pure Simoni style, I never really did find the damn cave, so my exact route shall be unknown, but was a wonderful tour of scrambles of the sandstone slabs below Bear Peak. Often getting cliffed out, only to find a new way up, down, around and sometimes

fallen boulders, while searching for Nebal Horn. Quite fun. My mountaineering boots were a little overkill on some of the moves and I sort of wished for some footwear with a lot more mobility, but whatareyagonna do?

Once reaching Nebal Horn proper, I finally got a good look of what I needed needed to be done, mostly get

from the damn thing. With the recent snow and freeze/thawing cycles, this proved to be quite a bit more exciting than it really could have been, which was nice. My left shoulder got a good test to see how reliable it’s becoming, while doing some downclimbing. Only one move proved indescribably painful, but today, nothing seems noteworthy or concerning to me, so that’s good. A nice soreness all in my upper body.

Upon reaching the top, I realized I once climbed up to this same spot… maybe 12 years earlier, again having lost the trail to go up Bear Peak. I remember there was a juvenile raptor, sharing the view with me. I remember being happy simply to be there, with the view.

The plans I eluded to in my last writing were cancelled – both a hiking/camping trip by bike to some mountains and a trip up Longs Peak, but that seems to be more the rule, rather than the exception for winter plans in the mountains. Like, right now: it’s again snowing – this time for maybe a foot, which is stopping my plans to get to Summit County tomorrow. For the time being. These small half-day trips though, are pretty fun and a good way to gauge fitness, gain confidence and generally keep myself sane while the streets leave me bruised and battered from falling on my bike on the most pedestrian of rides. 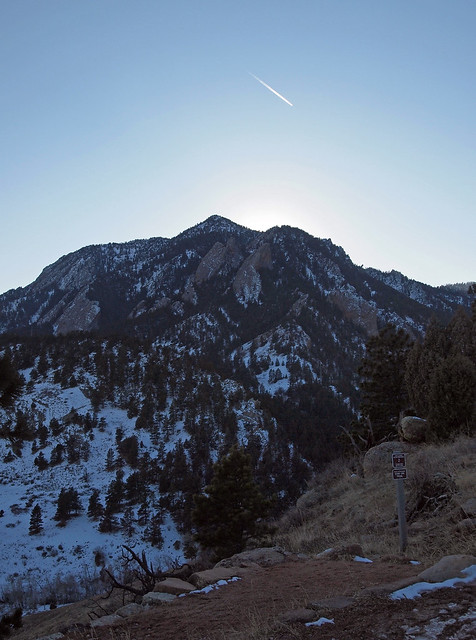 Bear Peak, backlit from the failing sun, on one of the shortest days of the year. 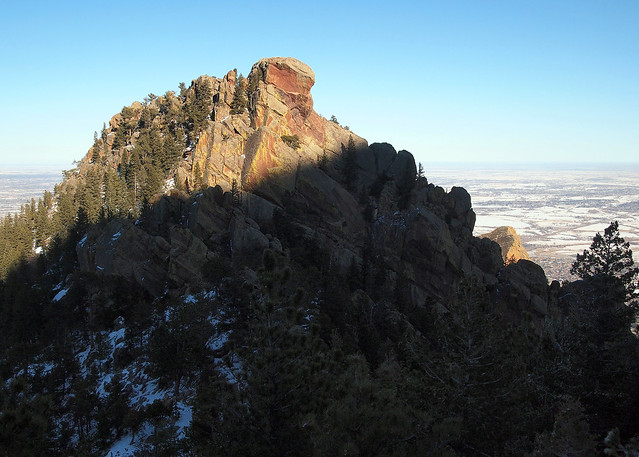 Nebal Horn, seen from the Saddle between Bear Peak and Nebal Horn 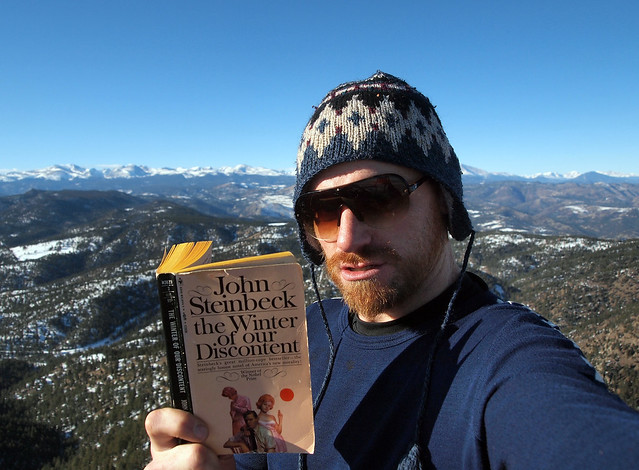 Season-appropriate reading, Longs Peak being blocked by my big head.