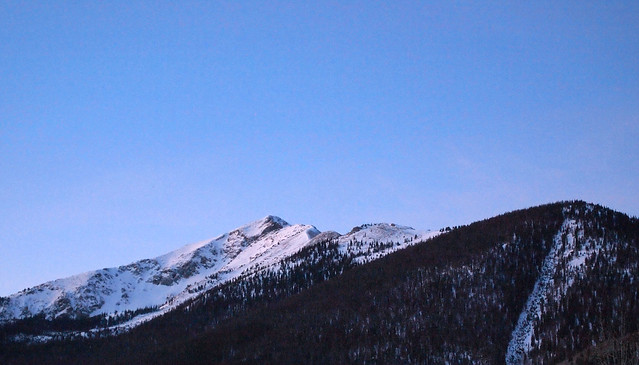 Plans to take on Sniktau -> Cupid -> Grizzly were defeated before they started – my ride fell through, sadly. Thems the breaks when you go carless and rely on the kindness of other people to get you to pokier parts of town. Like I wrote before, it seems the rule, rather than the exception that winter ascent plans are foiled, as the chance of complications are multiplied due to the weather, etc.

When the season turns a little more spring-like, I’ll ride a bike up to Loveland Pass and take on all of them (and more, and more!) mark my words! Another mystery to look forward to experiencing.

One of the highlights of staying in Summit County though is their absolutely brilliant public transportation system. Free buses and shuttles to almost every nook and cranny of the entire county. A complete necessity for people who work in town (which I have done, for a few summer seasons, long, long ago) and a fantastic way to lessen the strain of the road system with all the out-of-town visitors (like me, in the here-and-now) come piling in when the season is in full-swing.

The next day, I arose bright and early to take on Peak 1,

Took the bus from Breckenridge -> Frisco at 6:45am, got coffee and was on the trailhead by 8:00am. It’s like my Denver -> Boulder -> Boulder Mountain Park routine, severley magnified.

Peak 1 is just shy of 13,000 feet, far eclipsing the ~8,000 feet peaks I saunter in and around Boulder. Far above tree line and with the obvious alpine weather patterns, the higher parts of the peak at this time of year provide a few challenging mountaineering aspects and perfect for practicing my newly purchased ice axe and generally getting into potentially serious trouble alone.

The hike, while steep, was usual fair, until the weather station, situated near one of the false summits a little below treeline,

The snow on the ridge at this point was quite a bit more than I had anticipated – the wind was blowing quite incredibly (in the picture above, you can see the snow being blown from off the peak) and snow from the west side of the mountain was being blown over to the top and east side. Some post-holing hell, until hitting the ridge.

The ridge itself and its current condition led itself well to my ability, being just a little over my comfort level without getting crazy on me. For me, that means adrenaline is pouring through my veins, but not enough where I’m incapacitated and frozen with a sudden rush of fear and dread, wondering if I just had gotten up, what I may not so comfortably get down. Some people have different thresholds, I’m sure.

The wind guts provided much of the perceived fear, as the sound itself is enough to make one nervous. Complicate that with the fact that it’s pelting me with sharp granules of snow and pushing me over a 12,000+ edge of a f’n cliff, it’s enough to give one pause and wonder why it is I’m doing this alone – or at all. Therapy, I suppose – the old adage that one does not feel as if one is living, unless one is experiencing almost dying. Different paths to enlightenment, I guess.

Other than the damn wind, conditions were favorable. Although the snow being slightly – well, overwhelmingly dry and sugar-like, it also lacked any real patches of ice and I felt safe enough bumbling up the mountain with careful footing, some microspikes and the ice axe, with a fuzzy sense on how exactly to weld such a Device that’s pointy on three of it’s four endpoints and allows one to get farther into difficult places, rather than save one from reaching them in the first place.

Thankfully, working the tool seemed fairly intuitive with my only nervousness utilizing it being that my left hand was woefully less adequate at the task as my right. I had no leash – didn’t think I needed one, but the idea of dropping the Thing at the wrong time felt a little touchy. Guess I’ll make one, for next time.

Practicing some self-arrest moves lower on the mountain felt thankfully also second-nature. The wind-swept ridgeline didn’t seem to lend itself to tumbling down, though. Rather, it looks like a fall would be arrested via boulder field, rather than ice pick, with broken bones being its payment.

Getting to the final false summit gave a good view of the final, “pitch”. Earlier when looking at the summit from the weather station, it seemed as if there was a gentle snow slope that would give access to the west ridge from the north ridge and from there, the top. Upon closer inspection, that “gentle” slope looked like a fairly risky, avalanche-prone snow slide, who’s endpoint was an even steeper, rock-filled gully all the way down to I-70, on the west side. What to do.

Instead, I just traversed to the east ridge, which had a few scrambles in altogether more protected “gullies”, where the snow wasn’t so loaded. Looking straight up at the crux that allowed access to the summit,

It was steep enough that I questioned what the hell I thought I was doing, on the down climb, but it lacked an absurd amount of exposure – and I’m writing this, so all in good fun.

Much of mountaineering, I’m learning, is to know what not to do. The mountain has weaknesses and it’s patience to find those weaknesses and perhaps ask silently to the mountain if it’s a day for safe passage. It’s fun though, to find oneself changing strategies of ascension from one of walking to one of climbing. One does not have to be fully aware while walking, one may need such concentration while climbing.

And it’s rather sweet to be alone, at the top, on a blue bird day.

I managed to develop a disastrous stomach problem on the way down – probably all the coffee (and not enough of anything else), which made getting down a little uncomfortable. In my fashion, I also got a little lost and bushwhacked from the weather station off my original course, hoping to find less snow and more rock for a faster passage. Found myself much to the west of the ridge and had to both move down and across the northern face to the eastern, to get a bit more on course, without getting cliffed out, via cliffs I wasn’t sure were or were not there. Amazing how steep terrain can get that trees can still grow upon.

And I also overcompensated greatly, only realizing this, when I found that the coverage of trees I was moving fairly safely through had thinned out considerably and downward travel by me was causing mini slides. You know: avalanches.

“Hmm…”, I thought. “I’m going to get in trouble, here…”. Gingerly, I about-faced, into more denser timber and figured that I just walked straight into the J Chute, an enormous scar of an avalanche path that had famously taken out the entire township of Masonville early in the 20th century.

But, hey, “J for Justin”, right? A good sign. I at least got a bearing on where I was, so I simply barreled down the side of the chute, where I knew the hiker’s trail would be found traversing across its base.

Getting back into Frisco, I picked up some food and a bus back to Breckenridge, got to home base and took a righteous nap. Chamonix and it’s attractions such as the téléphérique to the Aiguille du Midi it ain’t, but its quite amazing to me to be able to saunter out of the door, catch a bus to the trailhead of something like Peak 1 and get back before dark on one of the shortest days of the year. All hail Summit County’s public transportation!

The next day, took a little snowshoe hike to Bakers Tank and back from the Boreas Pass winter TH, using the road the GDMBR uses for part of the circuit. A friend came up to bring me back to Denver, but before we did some shopping in Frisco and Dillon to get some clothes for the new position in Boulder.

Boulder and this new job were on my mind my entire holiday stay in Summit County. It was going to be a large transition for working a freelance and contracting scenario to almost, almost a 9-to-5-er, which I haven’t done in a very, very long time. It would perhaps mean moving to Boulder and trying to fit in intense and long training periods for things I haven’t yet announced I’m going to do (perhaps even to myself) with this job I found important to work well at, instead of having complete control over my schedule. I was excited at the prospect of getting up very early, running up to Green Mountain before work and maybe cylcing intervals up Flagstaff Road – a deviously steep uphill climb afterwards, while then pursuing my more artistic endeavors at night without having to think about work until the next morning. It was going to take discipline and I was ready.

While going from one shop to the next, the workplace called and let me know the job they needed me aboard for, fell through and with that, I wasn’t really needed. Damn. Felt defeated going home and a lot of problems I thought were in the process of being solved were now at step #1 again. Damn damn.

At least there’s more time to summit loftier peaks in solitude, thinking perhaps more of a mode of meditation, being just a little bit on this side of common sense in my path. Great mountains, allow this to be done in safety and sanity.